Planting gardens to create a home away from home 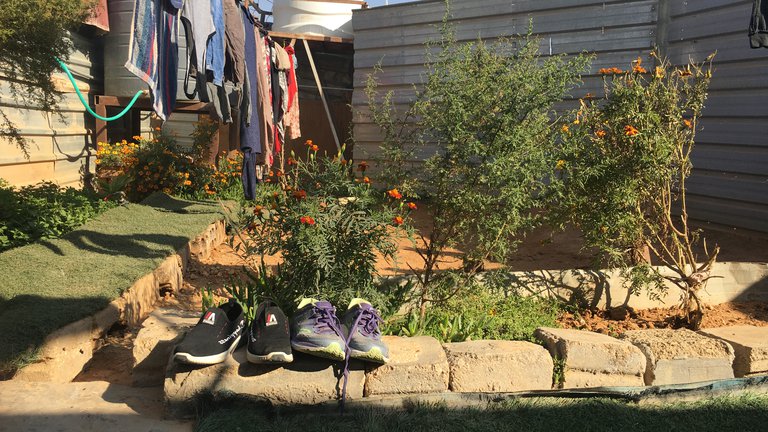 The first time I went to Zaatari refugee camp, I was struck by three physical facts. One, it is far away from Amman; two, it sits on an old abandoned olive grove; and three, it is, despite being known as a grass-roots creation, organised. Refugee camps are rarely set in the middle of capital cities, with the possible exception of Yarmouk, in Syria. They are fringe spaces, abstractly and concretely liminal, so the first fact was easy to move past. The third fact was interesting, but again, not unexpected. A contemporary post chaos-theory called ‘emergence’ suggests that organisations are connected, especially when growing from the ground up. The history of Zaatari refugee camp is quick to remind one that the camp has sprawled and grown as a direct response to the emergency of the Syrian migration crisis from its start.

Though I have returned to the camps many times since that first time, I am still in many ways stuck on the second fact that the tents and caravans sit on an old olive grove, which breathes life into a space that was abandoned. What the refugees have tended to do with the spaces they’ve been allocated is nest, in various ways. Indeed, the act of gardening itself has cropped up, more frequently than other acts of nesting, as a way to both view manifestations of refugee rooting and to talk about the need for roots without being direct with the vulnerable subjects of this research. So acute is their sense of interminable waiting and displacement, that talking about the tree outside their caravan – what they call the sheet metal structures that replaced their original tents – is easier for both them and myself, than talking directly about the fact that the caravan is their home.

Putting down new roots among old ones

‘What beautiful flowers’ I say to a father of five on an autumn day in 2019. I had made a point of revisiting certain caravans, to ask about the ways in which refugee senses of home have changed, or grown, or regressed, according to the passing of time since we last spoke. He invites me in and I’m soon being offered Arabic coffee, while my questions about nesting are indulged. I’m instructed by the officials now accompanying me that it is no longer possible to ask them about the past or the future. ‘It’s too difficult; too painful’ one explains. So instead I take to asking only about the flowers, bushes and trees. He explains that he has been planting things for some time. I ask when he began and he explains briefly, before being cut off by the aforementioned official’s hand in the air, that he started ‘when we realised we would be here a while.’ I return to the flowers and he explains that they need water – a theme of many of my interviews. Zaatari is not only set on an old abandoned olive grove, but also in the desert of a desert land: Jordan, a land without water. Indeed gardens, I am told in 2016, were prohibited in the early days of the camps, because they implied some sort of water stealing. In subsequent camps electricity was solar and water was rationed. Zaatari notoriously sprawls, which is how it has earned the quiet nickname of ‘the camp with a soul in it’ as one refugee reminded me.

The pursuit of a place to call home

It is not lost on me that the refugee crisis and the climate crisis coincide in the example of gardening in refugee camps. The refugee tendency to garden could be called an eco-globalist pursuit: an engagement in the whole earth of the land surrounding caravans, as opposed to an entanglement with a pursuit of nationhood, or selfhood in homes. One especially resourceful refugee I spoke to in Al Azraq camp told me that on the first day she found herself in the camps, she was offered a peach by a relief worker. After eating the peach, she planted its pit. A neighbor turned to her and joked, ‘so it seems you think you’re staying here awhile?’ She responded by offering a quiet philosophy of refugee gardening.

I hope I will be able to go back home in a few weeks, but if I can’t, then I’ll at least have a beautiful peach tree to look at, and peaches to eat. And if I am so lucky as to leave soon, then maybe one day a bird will have in this tree, a home for its nest.

It is the thinking beyond oneself, implied in this forcibly displaced, marginalised, almost-forgotten subject that has come to interest me in my many conversations with refugees about their gardens. I mean to ask them about the ways in which they ‘make homes while away,’ but what I learn is that their pursuit is of making a home. They want to make homes not just for themselves, but for their children, the limited wildlife that surrounds them, the visitors they so generously serve coffee to.

My own background is in literary studies. The poems that come to mind as I have these conversations are strangely American but they share a tendency to dwell on the ways in which people nest in small, yet meaningful ways. A poem by Elizabeth Bishop about a dirty Filling Station describes, among other things, oily doilies. The speaker looks around at ‘the extraneous plant,’ ‘the taboret,’ and the ‘doily,’ asking ‘why oh why’ before lingering on its patterning: ‘daisy stitch / with marguerites, I think, and heavy with gray crochet.’ After this lingering, she realises that:

Somebody embroidered the doily.
Somebody waters the plant,
or oils it, maybe. Somebody
arranges the rows of cans
…
Somebody loves us all.

This poem came to mind when I saw a refugee create a ‘chandelier’ out of collected solar lamps and tinfoil.

What does it mean to make a home?

The refugee situation is of waiting, of being forgotten, not ‘loved’ by a state of care. The refugee is, by the UNHCR definition, ‘a vulnerable person forcibly displaced,’ but the word ‘refugee’ also contains within it the implication that the displaced person is also one who seeks shelter. The interviews I have conducted within refugee shelters have told me, repeatedly, that ‘shelter’ comes of love. I mean this both with Bob Dylan lyrics ‘Come in she said I’ll give you, shelter from the storm’ in the background and with Zadie Smith quotations in the foreground that ‘There is such shelter in each other’ as one character tells another in On Beauty. The shelter that the refugee builds is of a mix of love for one’s family living with the space they’ve been allocated caring for the earth within which that space sits.

Returning to the olive grove on which Zaatari sits, I work to resituate my own research on refugee home-making to account for the ways in which the ‘home’ is conceptualised not just as a physical, inhabited space, nor as a nation but as a place on (ideally) green earth which we all share. When we talk of ‘making home away,’ how might what eco-critic Lawrence Buell calls a ‘whole earth perspective’ offer a sense of nearness to that earth, and how might the earth itself or talk of trees make it possible to talk, to borrow Adrienne Rich’s phrase ‘in times like these,’ of larger man-made catastrophes? Rich’s poem What Kinds of Times are These explains:

There’s a place between two stands of trees where the grass grows uphill
and the old revolutionary road breaks off into shadows
near a meeting-house abandoned by the persecuted
who disappeared into those shadows.

I’ve walked there picking mushrooms at the edge of dread, but don’t be fooled
this isn’t a Russian poem, this is not somewhere else but here,
our country moving closer to its own truth and dread,
its own ways of making people disappear.

I won’t tell you where the place is, the dark mesh of the woods
meeting the unmarked strip of light—
ghost-ridden crossroads, leafmold paradise:
I know already who wants to buy it, sell it, make it disappear.

And I won’t tell you where it is, so why do I tell you
anything? Because you still listen, because in times like these
to have you listen at all, it’s necessary
to talk about trees.

When a contemporary political crisis seems too traumatic to engage with, when the horror of what we do to ourselves feels too immense or complex to outline, the imagery and language of ecology – even the ecology we know we are destroying – often offers itself as familiar respite. Adrienne Rich’s What Kinds of Times are These, for example, marries humanitarian crises with ecological ones – that of the disappearing compound ‘leafmold paradise’ and the ‘country moving closer to its own truth and dread’ – through the soothing symbiosis of a made object, which, like a garden, represents a sense of order and balance. Like a garden, this poem is steeped in metaphors that point to things but do not necessarily circle them, such as the things my research on refugee home-making gestures towards, without necessarily making unequivocal declarations. There is the possibility of linking the refugee pursuit of an often maternal home-making process to an eco-globalist agenda, a link that is encouraged by the refugees themselves who so often describe lost homes.

Dr Yasmine Shamma is a Lecturer of Modern and Contemporary Literature at the University of Reading. She received the Humanities and Social Sciences Tackling the UK’s International Challenges grant in 2018. Her research on the refugee experience of displacement and nesting in ‘temporary’ accommodation features in the British Academy Virtual Summer Showcase.

Lead image: Refugees shoes, left outside in the make-shift courtyard of a refugee caravan in Zaatari refugee camp, 2019. Artificial grass lays besides the plants to give the semblance of a full garden. Image by Yasmine Shamma