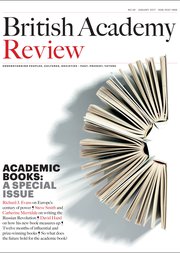 Includes:
Richard J Evans on Europe’s century of power
Steve Smith and Catherine Merridale on writing the Russian Revolution
David Hand on how his new book measures up
Twelve months of influential and prize-winning books
So what does the future hold for the academic book?

HEARING VOICES: A guide to good listening from the British Academy
Lessons for extraordinary times
Catherine Merridale · On Lenin’s trail

GLOBAL INSIGHTS: Understanding the world we live in
David Logan · Turkey and the West: Whatever went wrong?

EMERGING PERSPECTIVES: Writing by British Academy-supported early career scholars
The book that has influenced me most in the last 12 months
Nicola Wilson · Broadbrows and book clubs

FROM THE ARCHIVE: Curiosities from the basement
Burnt books: The British Academy and the restoration of two academic libraries

WEB SUPPLEMENT for Academic Book Week 2017
Amartya Sen in conversation with Nicholas Stern about his career and published works, including his new book, Collective Choice and Social Welfare: Expanded Edition

The British Academy Review is licensed under a Creative Commons Attribution-NonCommercial-NoDerivs 3.0 Unported License.