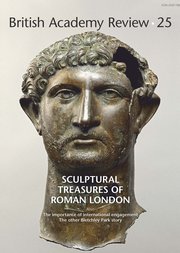 Discussing what Prime Ministers are for
Peter Hennessy

Immigration: The state of debate

After 2015: Development and its alternatives
Clive Gabay

The deep past as a social asset in Jordan
Bill Finlayson, with Paul Burtenshaw and Carol Palmer

Roman sculpture from London and the South-East
Penny Coombe

A study of the studiolo
Martin Kemp

Radio and the voice
David Hendy

Lost without translation: Why codebreaking is not just a numbers game
Nigel Vincent and Helen Wallace
Supplementary webpage:
Humanities scholars who worked in military intelligence in the Second World War

Degrees of uncertainty
Undergraduate and postgraduate choices framed by debt?
Thomas Kohut, with Jonathan Matthews and Natasha McCarthy
The portrayal of the graduate labour market in the media: The permanent state of perplexity and discontent
Gerbrand Tholen

Frida Mond: A good friend to the British Academy

The British Academy Review is licensed under a Creative Commons Attribution-NonCommercial-NoDerivs 3.0 Unported License.