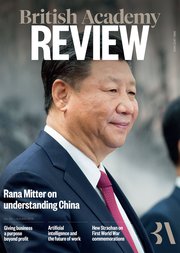 How can we change the nature of the corporation?
Colin Mayer and Henry Richards outline five levers for government and business to bring about such a major shift

Can corporations contribute directly to social goals?
Peter J. Buckley reveals the web of influences on business to ‘do good’

Lost in detail: setting priorities for corporations in challenging times
Daniela Weber-Rey looks at different approaches being pursued in Europe to restore trust in business

The future of the company tax
Mihir A. Desai and Dhammika Dharmapala explore creative ways to overcome the difficulty of collecting tax from corporations

Whose business is prosperity?
Henrietta L. Moore argues that business needs to deliver sustainable prosperity for people and planet

Artificial intelligence and the future of work

Thinking intelligently about artificial intelligence
Margaret A. Boden talks to the British Academy Review about the political and philosophical problems posed by AI

AI, work and ‘outcome-thinking’
Richard Susskind argues that working practices must ultimately serve the needs of customers not workers

Rana Mitter on understanding China – past, present and future

Thomas Aquinas, music composition, education … and (of course) Brexit
Fellows of the British Academy offer us some thoughts

Aurel Stein’s aerial survey of the Roman Empire’s frontier in Iraq and Jordan, 1938-1939
Karen Syrett draws on the British Academy’s archives to tell a pioneering tale

Borders at the edge of Europe
Kapka Kassabova talks about the Cold War legacies playing out where Bulgaria, Greece and Turkey meet

Establishing the Arts and Humanities and Research Board, 1998

The British Academy Review is licensed under a
Creative Commons Attribution-NonCommercial-NoDerivatives 4.0 International License.