by Jane Humphries and Benjamin Schneider 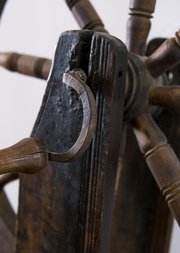 Jane Humphries is Emeritus Professor of Economic History at the University of Oxford, and Centennial Professor at the London School of Economics. She was elected a Fellow of the British Academy in 2012.

Benjamin Schneider is a DPhil student in Economic and Social History at the University of Oxford.

The technological unemployment widely predicted to result from the spread of artificial intelligence is often discussed in the context of past transformations. Handloom weavers, bank tellers, and telephone operators illustrate the fate of those impacted by technology. These cases, while compelling, overlook an earlier and more significant case of technological unemployment: the destruction of hand spinning by factory production in the late 18th century. Hand spinners have been neglected in the historiography of industrial change, partly because they were almost exclusively women and children who worked on simple equipment in domestic settings. They have been rediscovered as a by-product of economic historians’ renewed interest in the causes and consequences of mechanisation.

Our work on hand spinners began as an investigation of their wages, as other researchers had claimed that the relatively high cost of employing workers made labour-saving machinery profitable and thereby contributed to the technological revolution that underpinned industrialisation [note 1]. Since hand spinners were paid primarily through piece rates, reconstruction of their wages required an investigation of productivity and the spinning labour process. This led to a comparison of hand and factory work and an assessment of the scale and implications of technological displacement. Our spinsters’ story resonates with aspects of the future of work today.

Hand spinning is the production of yarn on spinning wheels, using a combination of the mechanical power of the wheel and manual dexterity to twist and pull fibres of cotton, wool or flax into material that can be woven into cloth. It was generally undertaken in the home, sometimes by individual workers but often involving family members in small production teams. Incentives were provided by piece rates (payment by output), though some spinners worked their wheels in institutions such as workhouses and spinning schools where targets were set to drive productivity. Spinning was seasonal, with work frequently abandoned during the harvest and intensified in the winter months. It was embraced for its flexibility, and was allegedly readily combined with domestic responsibilities in what today we would think of as zero-hours contracts: spinners would only have work when a local yarn or textile factor provided them with fibre.

Workers in some places managed production and sold final outputs, but generally yarn masters controlled both the supply of material and sale of finished products. Control over spinners’ pace of work and yarn quality could only be exercised intermittently. The demand for greater oversight was a factor behind masters’ interest in mechanised processes.

The vast majority of hand spinners were women and children. Employment was especially common in the textile centres of East Anglia, the West Country, and later Yorkshire and Lancashire, but hand spinning appears in 18th-century sources throughout Britain. While there is some evidence for the agglomeration of men’s employment in textile production in the northwest by the mid-18th century (before the mechanisation of most textile production processes), sources do not suggest that hand spinning became similarly concentrated. Hand spinning had penetrated the lowland countryside and remote upland areas as well as towns in many regions of the country. It was a widespread source of income available to many women whose husbands and fathers worked in other jobs and sectors.

Estimating employment numbers in hand spinning requires information on productivity and through-put. Craig Muldrew’s pioneering reconstruction used productivity estimates from contemporary writers, export values, and household budget information [note 2]. Our alternative method builds on fibre supply data from recent research and our estimates of productivity from contemporary sources; and our in-progress work suggests that more than 500,000 spinners may have been needed to process Britain’s fibre inputs by 1750, if they were all working full-time. While we differ from Muldrew to some extent, the results underline that hand spinning was the largest single manufacturing job in industrialising Britain.

The mechanisation of spinning revolutionised the labour process. Instead of the relative quiet of a home, spinners worked in shops full of jennies, in front of ranks of water frames, or around outward running and returning mules. Factory production also meant a greater division of labour. Rather than a single spinner, perhaps assisted by her children, factory work demanded a centralised workforce with women, children, and men performing different tasks with differentiated remuneration.

Factory spinning meant workers ceded flexibility over working time, had little or no control over the labour process and its intensity, and often laboured in unhealthy conditions. Wages exceeded those of hand spinners, with nominal factory pay in the 1790s probably about twice as high as the long-run hand spinning average for the 18th century. We might conjecture whether these premia ‘compensated’ spinners for the transition to factories. However, in the initial phase of mechanisation there were far fewer new jobs, and those that were created were inaccessible to the women and children who had previously spun in their own homes far from the rivers of the Peak District and South-Western Lancashire. There was a mismatch of numbers, locations, skills, and family structures.

In contrast to hand spinning, factory spinning was geographically concentrated, initially drawn to sources of water power often in isolated areas. The desired composition of the workforce involved large numbers of women and children with few jobs for men. It was out of synch with family structures, and initially employers struggled to recruit. Many resorted to the easy option of employing pauper apprentices, orphans who came without family ties. The second generation of mills employed steam power, allowing for – or even encouraging – greater concentration of mills in urban areas, which had easier access to input markets, such as male mule spinners, the raw cotton market, and product markets, such as overseas trade. Thus, employment in spinning moved from wide dispersal in hand spinners’ homes, to clustering in a smattering of locations in rural areas, to, finally, concentration in factory districts.

The limited short-run increase in demand for yarn meant that large productivity gains from spinning machinery resulted in widespread unemployment, with job losses running into the hundreds of thousands by the early 19th century. Many rural areas simply deindustrialised. While there was a parliamentary investigation into the distress caused by spinning machines in Lancashire in 1780, the national government did nothing. Spinning machines were a profitable tool for the new factories and produced an abundance of yarn, and therefore more work, for male handloom weavers in the new textile districts of the North.

The loss of local earnings opportunities for women and children was often disastrous, especially as it coincided with falling demand for labour in arable agriculture. Although spinners’ wages had never been as high as some social commentators claimed, they had constituted a useful supplement to the incomes of families, particularly in low-wage agricultural counties. They even provided the opportunity for women to remain independent as literal spinsters, though spinning work would hardly have enabled them to support children alone.

The loss of this employment created dependence on men and men’s wages. But these ‘male breadwinner families’ were created in advance of an increase in men’s wages to a breadwinner level or indeed of widespread acceptance of the breadwinner role and the discipline it involved. As such they were economically fragile and frequently reliant on parish relief. Indeed, the male breadwinner family was an aspirational ideal that reconfigured the emerging dependence of women into a social benefit. The rise of the male-breadwinner family is usually explained by positive choices to withdraw women and children from the labour market to produce domestic comfort or to attend school. The loss of female employment in hand spinning, given its scale and timing, suggests darker origins. Lack of opportunity to work and contribute made women dependent, and burdened men with a breadwinner commitment that they were as yet ill-positioned to meet.

The loss of hand spinners’ contributions to family incomes exacerbated poverty, particularly in low-wage agricultural areas, and was widely understood as a source of the rocketing expenditures on poor relief. Thus, when the authorities surveyed parishes and townships in the 1830s for information on the sources of poverty as a prelude to the dramatic recasting of poor relief under the New Poor Law, questions about work availability for women and children prompted unsolicited and nostalgic reminiscences about the disappearance of spinning, underlining its earlier role in protecting families from want. The New Poor Law could replace neither this widely available and flexible employment nor its role in underpinning the family economy of the poor. There were desultory efforts to encourage migration to the factory districts, though these were hampered by labour mismatches, and were overshadowed by the main thrust of reform which sought to promote social norms that would reduce pauperism: prudent marriage; fewer children; less illegitimacy; disciplined breadwinners.

Technological displacement in the past and the present

The technological change we have considered was brutal. There was no policy intervention to help our displaced workers – indeed, despite the astonishing numbers involved, they have been overlooked by historians as they were by contemporaries. But the spinners’ case underlines some of the reasons why technological shifts can create long-lasting pain.

Jobs lost and jobs created as a result of technological change usually diverge in location and organisation, making simplistic solutions – like taking work to the workers or workers to the work – problematic.

Moreover, technological change can impact not only workers with clear occupational titles, but part-time, seemingly peripheral workers whose earnings might be low but are nonetheless meaningful. These workers are less visible and their unemployment can be further disguised by absorption into the family.

These implications take us off the shopfloor, but are a significant component of the social change that accompanies technological innovation. In this way families can be disrupted by technological unemployment, producing second-order effects on the demand for social services and welfare.

Finally, technological change is almost always combined with organisational change that may be equally disruptive to working lives. Let us take the hand spinner’s tale to heart and not overlook her modern counterparts in the changing world of work.