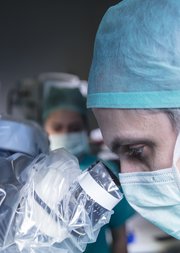 Richard Susskind is Technology Adviser to the Lord Chief Justice of England and Wales, and Chair of the Advisory Board and Visiting Professor at the Oxford Internet Institute.

In 2017, I was invited to speak about the future to a gathering of two thousand neurosurgeons. My opening statement was that patients don’t really want neurosurgeons. What they want is health. For a particular type of health problem, I acknowledged that neurosurgeons are undoubtedly the best solution we have today. But I went on to say that this might not always be so, because 50 years from now, give or take, we’ll probably look back and think it remarkable that we used to cut heads and bodies open. I wanted to challenge those present who felt that the future lay only in robotic neurosurgery because surgery will surely not be with us in the long run – the health troubles to which neurosurgeons currently devote their energies will in due course be sorted by non-invasive techniques.

In speaking this way, I was encouraging a mind-set that I call ‘outcome-thinking’.

Outcome-thinking can be invoked when considering the future of all professions. Take the world of architects. People don’t generally want these experts either. What they really want, as Vitruvius recognised in the 1st century BC, are buildings that are durable, useful, and beautiful. Nor do taxpayers want tax accountants. They want their relevant financial information sent to the authorities in compliant form. Fifty million Americans are now using online tools to submit their tax returns. Few seem to be mourning the loss of social interaction with their tax advisers. In a similar vein, I spoke not long ago to a group of generals of the British army. My theme then was that ‘citizens don’t want soldiers; they want security’. The same point holds in quite different fields. Patients don’t want psychotherapists. Roughly speaking, they want peace of mind. Litigants don’t want courts. They want their disputes resolved fairly and with finality. You get the point. It’s not brain surgery (no, wait …).

The disconcerting message here for all professionals is that our clients don’t want us. They want the outcomes we bring. And when these outcomes can be reliably delivered in new ways that are demonstrably cheaper, better, quicker or more convenient than the current offering, we can expect the market to switch to the alternatives.

Many professionals and commentators balk at this line of outcome-thinking. They insist that what a client surely needs, and will always need, is a trusted adviser – an empathetic and expert human counsellor. But this is to confuse means with ends, to muddle up how we work with what we deliver. It is to assume that there is something intrinsically valuable, indispensable even, in our current ways of working. It is to fixate on today’s processes and disregard our broader telos (purpose or goal). I challenge this. I am not denying that the work of many professionals (surgeons, nurses, dentists, vets, and physicians, for instance) is often admirable and heart-warming, as well as socially beneficial. Nor am I denying that these professionals find their work satisfying and stimulating, lending their lives meaning and purpose.

But I am questioning whether the working practices of these and other professionals, in and of themselves, are of such value that they should be retained at all costs in the face of alternative services that clients and customers find preferable. I find myself, in other words, favouring the interests of patients over doctors, of clients over lawyers, and of students over teachers. Adam Smith helps me here. In the Wealth of Nations, he argues that ‘consumption is the sole end and purpose of all production; and the interest of the producer ought to be attended to, only so far as it may be necessary for promoting that of the consumer’. Spot on.

Consider this thought experiment. Imagine that medical scientists developed an affordable vaccine whose widespread introduction would prevent the development of all cancers. Would we feel that we should limit its deployment to protect the livelihood and self-esteem of oncologists? I pick an extreme example, precisely because of the great contribution that today’s oncologists make to our lives. Even then, I suspect we would come to conclude, for the sake of the community’s health as well as for economic reasons – for the sake of outcomes – that we should sensitively phase out this branch of medical practice. It is not the purpose of ill health to keep doctors employed.

More generally, there is no obvious reason that many of today’s professionals won’t be displaced by increasingly capable systems and then fade from prominence, much as blacksmiths, tallow chandlers, mercers, and many trades became redundant in their day. Today, people still want transport, candles, and silk, but we have found new ways of satisfying these demands.

In the face of this potential assault, many professionals take comfort from task-based thinking. They analyse the work they currently do, they break it down into a set of component tasks, and then identify those that they think might be undertaken by machines and those that seem to be beyond the foreseeable capacities of the most advanced systems. When they reckon that a significant proportion of their current tasks cannot be taken on by machines, they feel safe. And their task-based rationalisation is supported by most of the reports on the future of work being published by academics and consultants, and reproduced daily in the mainstream media.

My message is that this kind of task-based thought is deeply flawed. Think about legal work. Commentators and practitioners often insist that much of the work of lawyers is beyond the reach of technology. They will suggest, for example, and not unreasonably, that the work of court lawyers cannot be replaced by machines. How on earth could a robot appear as an advocate before a judge? The answer, of course, is that we are light years from this happening. But the story doesn’t end here, because these traditionalists are asking and answering the wrong question. Mistakenly, they are focusing on current ways of working rather than on whether the outcomes that court lawyers deliver might be achieved in very different ways.

Now consider online courts. Long story short, there is a growing global movement to conduct much of the work of courts not by physically congregating in courtrooms and arguing in person, but by submitting evidence and arguments electronically to judges. The idea is that the final decisions of the judges (still humans) will also be delivered in electronic form. The outcome of the court (the binding decision) is unchanged but the methods by which it is reached are transformed, with the oral advocacy of court lawyers eliminated from the process. It is no comfort that machines can’t replicate the work of advocates and deliver a soaring closing argument in the courtroom. The irreplaceability of the work of oral advocates becomes an irrelevance.

In short, the systems that will replace us are unlikely to work like us.

In considering the future of work, then, the big question is not whether machines can take on the work that humans do. It is whether the outcomes of today’s human labour can be delivered in different ways with the support of technologies. Task-based analysis of the impact of machines, relying often on the outdated distinction of labour economists between routine and non-routine work, greatly understates the extent to which the work of human beings will be taken on by AI.

All of that said, I recognise that outcome-thinking has at least three significant limitations. The first is that it’s conceivable, at least in principle, that some working practices and processes are intrinsically valuable and important to retain for their own sake. I struggle to find examples of this but I leave it open to traditionalists to argue this case (some lawyers will say that the courtroom is inherently of value in this way – as a generality, I don’t accept this).

The second limitation of my consequentialism (as philosophers might describe it) is that any novel processes that deliver the desired outcomes must be sustainable. There is little point in jettisoning old ways of delivering outcomes, if the new system is destined to run out of steam. In other words, we might need to retain some of the old system (people and processes) to feed the new one.

Finally, we should accept that what clients and customers want may not be what they actually need. Inexpert consumers, crudely speaking, may not know what’s best for them. Nor indeed might expert consumers. Steve Jobs nailed the point when he observed that ‘people don’t know what they want until you show it to them’. There is much in this. Consumers, users, clients and customers cannot be expected, for instance, to keep up with AI and other advanced technological developments. Their current conceptions of what is desirable are constrained by what they think is possible.

But these three qualifications are peripheral to my main point for professionals which is that clients don’t really want us. They want the outcomes we bring. In an AI-enabled internet society, our challenge, by and large, is to think deeply about our telos and find new ways to deliver long-established outcomes. In the long term, we will find that these will increasingly call for systems rather than traditional advisers.