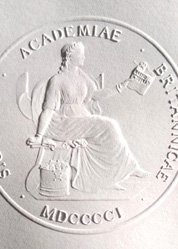 In March 1906, just a few years after the British Academy’s foundation, the Academy’s Council decided that it was desirable to have a seal, so that the investment of Academy capital could be authorised ‘under Common Seal’. Accordingly, it was agreed that two Fellows of the British Academy should form a Sub-Committee ‘to report upon the design for a seal’ (Council Minutes, 14 March 1906). The two Fellows were: Sir Edward Maunde Thompson, Director and Principal Librarian of the British Museum; and Sir William Anson MP, who had until recently been the first Parliamentary Secretary to the Board of Education.

How to capture in visual form the character of the ‘British Academy for the Promotion of Historical, Philosophical and Philological Studies’? Someone else had already done this – at the Academy’s expense – within a month of the new body receiving its Royal Charter in August 1902. On 3 September 1902, Punch magazine published a cartoon in which ‘Scientific Literature’ – with gown and mortar board – mounts the steps into the British Academy, while ‘Poetry, Drama, and Romance’ are sadly excluded behind iron railings.

Edward Linley Sambourne, ‘The Uninvited Graces’, Punch, 3 September 1902. The caption reads: ‘The new British Academy, which has lately received a Royal Charter, is restricted to the representatives of Scientific Literature, and takes no cognizance of Poetry, Drama, and Romance.’ The cartoon should perhaps have more accurately been entitled ‘The Uninvited Muses’.
The design Sub-Committee may well not have remembered this unfortunate prior use of a female form in a pseudo-classical setting; but in any case it was not deterred from opting to base the Academy’s seal around an image of Clio, the Muse of History. The particular image of Clio that was selected was a distinctive one, taken from a set of frescos of Apollo and the Muses discovered in the villa of Julia Felix at Pompeii in 1755, now in the Louvre. In her left hand, Clio holds a scroll bearing the words
ΚΛΕΙШ ΙСΤΟΡΙΑΝ
which perhaps can be translated broadly as ‘Clio [invented] inquiry’ [note 1].
By 1898, that fresco had already been published as a black and white illustration, which was probably used as the starting point for the rather more stylised version of Clio that was created for the Academy’s use. To the naive viewer, the image has a slightly Britannia-like character which perhaps was not entirely accidental.


Around Clio were added the words ‘Sigillum Academiae Britannicae’ (Seal of the British Academy).

And a date was added: ‘MDCCCCI’ (1901). The ‘proposed Fellows of the British Academy’ had indeed met for the first time as such on 17 December 1901. But, as has already been mentioned, the Academy did not receive its Royal Charter until August 1902 [note 2], and 1902 would later be regarded as the more important date in the Academy’s foundation history (key anniversary celebrations were held in 1927, 1952 and 2002). So the presence of the 1901 date on the seal would be rather confusing for later generations.

Once the design was agreed, E.M. Thompson was authorised to engage ‘Mr Pinches’ to make the seal. John Pinches Medallists was a family business founded in 1840; John Harvey Pinches had inherited the company from his father, John Pinches, in 1905. The Council minutes state that ‘Sir E. Maunde Thompson was authorised to expend not more than £30 in respect of the seal’ (Council Minutes, 27 February 1907).
When a seal is used to authenticate a document, this traditionally involves the image being impressed in melted wax. But presses can also be used to emboss the image on the document paper itself, squeezed between the upper and lower dies, and that is the method used for the British Academy’s seal.


The Academy’s press appears to be similar to that currently used by the Government of the United States for impressing wafers attached to government documents. That press, called ‘The Great Seal’, was made around the same time, in 1903-5, and is kept in the Department of State. (Apparently it was used some two to three thousand times during 2009.) [note 3]

The first occasion for the use of the British Academy’s new seal was in connection with the drawing up of a Trust document in respect of the extraordinarily generous gift of £10,000 from Miss Constance Schweich to establish a Fund in the name of her father, Leopold Schweich [note 4]. In October 1907, a ‘Committee on the Drafting of the Schweich Trust’ made specific recommendations on the prudent use of the seal in such circumstances [note 5], and at the meeting of Council in November, ‘the affixing of the Seal of the Academy to the Declaration of Trust of the Schweich Fund was authorised’ (Council Minutes, 6 November 1907).

In a modest extension of its use, the seal was reproduced as a printed image to adorn a number of ceremonial scrolls produced by the British Academy to mark significant occasions. For example, scrolls were sent to King George V both to salute his accession in 1910 and to congratulate him on his 25th anniversary in 1935.

But it was not until the Academy marked its own 50th anniversary in 1952 that the seal image became more generally adopted as the Academy’s logo. In spite of the confusing ‘1901’ date, the seal was embossed in gold on the menu card for the anniversary dinner, and printed on the cover of Sir Frederic Kenyon’s commemorative booklet on The British Academy: The First Fifty Years. And from that moment on, perhaps as the Academy had an enhanced sense of its own history and identity, the seal began to appear on an increasing range of official literature issued by it – and became established as the Academy’s emblem.

During the year of the Academy’s centenary in 2002, the problem of the awkward 1901 date was avoided by the creation of an amended version of the image, bearing more specifically appropriate lettering. More daringly, a bronze medal was minted – to be presented to dignitaries at the Centenary Conference in July 2002 – bearing a modern and surprisingly casual depiction of Clio.
After the centenary year, the logo immediately reverted to the original version of the seal, but there was perhaps now a sense that change was permissible – in particular to meet the demands of its use in digital contexts. In 2008, as part of a wider rebranding exercise, Clio was redrawn more simply, and this was accompanied by the deliberate loss of any lettering running around her – and the accidental loss of the final ‘N’ from the lettering on her scroll.


The seal press of the British Academy has not been used for the formal authentication of a document for several years. And as the Academy conducts another review of its ‘brand’, what place may Clio still have as part of the Academy’s future visual identity?

‘From the Archive’ research by Karen Syrett, British Academy Archivist and Librarian. Text by James Rivington.

1. We are grateful to Alan Griffiths, Senior Honorary Research Fellow, University College London, for his suggestions about the Clio fresco.

3. We are grateful to John Cherry for this information. Along with other members of the Board of Sigillvm, he inspected the British Academy’s seal press in December 2017. The Board also visited the Society of Antiquaries of London which has a similar type of screw press, although that is thought to date from the 18th century.

5. The recommended requirement that three authorised people should participate in the use of the British Academy’s seal continues to be reflected in the Academy’s Bye-Laws. These stipulate that ‘every deed or writing to which the Common Seal of the Academy is to be affixed shall be passed and sealed in Council’ – except in case of urgency, when the sealing can be done in the presence of the President or a Vice-President or the Treasurer, and another member of the Council, and the Chief Executive. Anecdotal evidence suggests that this requirement that three authorised people should actually be present to witness the sealing has sometimes been awkward to meet in the past, and there have been occasions when there was an acceptance that one or other of them was present ‘in spirit’.