One hundred years of Honorary Fellows of the British Academy 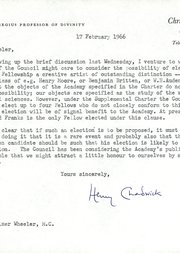 The prime criterion for Election to the Fellowship of the Academy has always been academic distinction in the humanities and social sciences, as reflected in scholarly research activity and publication. But within a few years of its foundation, the Academy felt the need to find a way of honouring those who served the interests of its disciplines in different capacities.

In 1916, the Council of the British Academy agreed to introduce a new category of ‘Honorary Fellowship of the British Academy’. The idea had been in circulation for several years, but final consideration of it had regularly been deferred. In January 1916, the Council ‘agreed to appoint a Committee to consider the propriety of electing a limited number of Honorary Fellows’. In May, having discussed the committee’s report, the Council resolved to establish this new class of Fellowship: ‘Honorary Fellows must be persons of distinction possessing a special acquaintance with some branch of study which it is the object of the Academy to promote; or, who have contributed signally to the promotion of the purposes for which the Academy was founded’ [note 1].

At that same May 1916 meeting, the Council agreed the name of the first person to be put forward for Honorary Fellowship, Evelyn Baring, 1st Earl of Cromer. Cromer had been a diplomat who had been much involved in the affairs of Egypt. But he had always had a personal interest in Classics, and in 1916 he offered the British Academy £1000 (a handsome sum at that time) to establish ‘a Prize for the best Essay on a subject connected with the Language, History, Art, Literature, or Philosophy of Greece’. In his Presidential Address on 30 July, Viscount Bryce assured the Academy’s Annual General Meeting that ‘the Council had decided to propose him to you before it had the least idea that he contemplated this foundation’ [note 2] – something that the Council’s own minutes show to be completely untrue! In later years, the Academy would be happy to bestow Honorary Fellowship more transparently on those whose generosity had supported it and its purposes [note 3].

At its meeting on 28 July 1916, the Council of the British Academy put forward the name of a second candidate to receive Honorary Fellowship: the Rt. Hon Sir Samuel Griffith, Chief Justice of Australia, ‘for his eminence as a constitutional lawyer’. Griffith was the first of several distinguished members of the legal world to be recognised by the Academy in this way.

At those May and July 1916 meetings, the Academy’s Council also intriguingly floated the idea that some ‘Ordinary’ Fellows of the British Academy might be transferred to Honorary Fellowship, in the way that Fellows can now opt to become ‘Emeritus Fellows’. Indeed, it was agreed that 10 specific individuals – all aged between 72 and 88 – should be invited to transfer to the new Honorary category. For one reason or another, this did not happen – though some of those individuals would choose to ‘retire’ from the Fellowship in subsequent years.

In the hundred years 1916–2015, just 69 individuals have received the Honorary Fellowship of the British Academy. There are currently 27 Honorary Fellows (prior to the election of any new names at the Annual General Meeting in July 2016) [note 4].

Forty-four years after establishing Honorary Fellowship, the British Academy looked for an additional way to elect into its ranks a select number of those who could make a contribution beyond a narrowly academic one. In 1960, The Queen granted the Academy a Supplemental Charter enabling the addition to the Fellowship of individuals who ‘are such that their election will be of signal benefit to the Academy’ – on condition that there would never be more than four in this category at any time.

In that first year, 1960, the Academy took the opportunity to elect two individuals who it thought would indeed be of material benefit. ‘With his wide knowledge of the civil service and the city’ it was thought that Sir Oliver Franks ‘would be an invaluable help to the Academy, and there is no doubt that he would be eager to do all that he could for us’ [note 5]. Lord (Harry) Nathan had already proved his worth: ‘as Honorary Legal Adviser to the British Academy he [had] successfully fought the Income Tax authorities’ on a point of principle.

By the beginning of 1966, no new names had been brought forward through this mechanism (and Nathan had died in 1963). In February 1966, the Revd Professor Henry Chadwick FBA wrote to Sir Mortimer Wheeler FBA, the Secretary of the British Academy, to suggest that the process might be triggered again, to make possible the election to the Fellowship of ‘a creative artist of outstanding distinction – someone in the class of e.g. Henry Moore, or Benjamin Britten, or W.H. Auden’. Chadwick acknowledged that this should be ‘a rare event’, and that the candidate should be of such distinction that their election ‘is likely to be virtually by acclamation’. And he justified how such an election would be of ‘signal benefit to the Academy’ by pointing out: ‘The Council has been considering the Academy’s public “image”. It is possible that we might attract a little honour to ourselves by making such an election.’

In response to this proposal, Wheeler replied: ‘Personally I am inclined to think well of it. Years ago I suggested T.S. Eliot, but at that time the climate was not quite right. On the whole I think that it has improved.’ Wheeler was right. The sculptor Henry Moore was elected a Fellow of the British Academy ‘under Supplemental Charter’ in 1966. In his letter to Moore, Wheeler explained: ‘Although the British Academy is not, in principle, concerned with creative artistry in what may be called the first degree, we should very much like to have at least some form of association with the creative arts, as well as with derivative scholarship. … I need hardly add how very greatly the Academy would appreciate your accession to its number.’

Only two more individuals would be elected through this mechanism, and none since 1973.