The British Academy and the Shakespeare Tercentenary, 1916 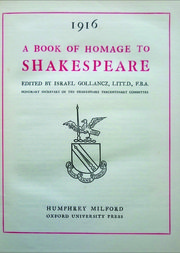 In January 1914, the Council of the British Academy initiated discussion of what should be done to start the planning of a national celebration of the tercentenary of Shakespeare’s death in 1916. In March the Academy convened a ‘conference’ of representatives from societies and institutions that it was thought would be interested in such a project (including the universities of Oxford, Cambridge and London). That meeting approved the principle of ‘a Celebration to honour the memory of Shakespeare’, and asked the Academy to take steps to put together an organising committee.

In April 1914, the President of the British Academy, Viscount Bryce, sent a letter to a wide range of academics, politicians, dignitaries and artists, both in the UK and abroad, announcing the intention for there to be ‘a Commemoration of our greatest national poet’, and inviting people to show their interest in the proposal by allowing their names to be added to a ‘General Committee’ of supporters.


The letter elicited considerable interest. The great Shakespearean actress, Dame Ellen Terry, dictated a letter from New Zealand to express her enthusiasm for the project. The actor and theatre manager, Sir Herbert Beerbohm Tree was another early signatory. George Bernard Shaw scribbled ‘Yes, with pleasure’ at the bottom of Bryce’s letter and returned it – complete with doodle (see image).

Bryce chaired a second meeting of interested parties in July 1914, at which it was resolved ‘That the Tercentenary of the death of Shakespeare should be commemorated in a manner worthy of the veneration in which the memory of Shakespeare is held by the English-speaking peoples and by the world at large’. An Executive Committee was appointed to take over from the British Academy the organisation of the Tercentenary, but the Committee’s Honorary Secretary would be Professor Israel Gollancz – who was the Secretary of the British Academy.

‘Then came the War; and the dream of the world’s brotherhood to be demonstrated by its common and united commemoration of Shakespeare, with many another fond illusion, was rudely shattered.’ So wrote Gollancz despairingly in 1916 [1]. ‘In face of sterner duties all such projects fell necessarily into abeyance.’

But Gollancz – himself an eminent Shakespeare scholar (he had edited the popular pocket-sized ‘Temple’ editions of Shakespeare in the 1890s) – was dogged in his determination ‘that not even under present conditions should the Shakespeare Tercentenary be allowed to pass unobserved, though the scope of our original programme would of necessity be modified’. He therefore contrived ‘to hand down to posterity a worthy Record of the widespread reverence for Shakespeare as shared with the English-speaking world by our Allies and Neutral States, namely, by the publication, in honour of the Tercentenary, of a Book of Homage to Shakespeare, with contributions in prose and verse, representing the ubiquity of the poet’s mighty influence.’ In this handsome volume, among the many miscellaneous contributions by distinguished academic and literary figures, there are ‘Some Stray Thoughts’ by the British Academy’s President, Viscount Bryce.

A series of British Academy ‘Shakespeare Lectures’ had begun in 1911. In 1916, the lecture was delivered by J.W. Mackail, formerly Professor of Poetry at the University of Oxford, and a Fellow of the British Academy. In his lecture entitled ‘Shakespeare after Three Hundred Years’ [2], Mackail reviewed the shifting tides of critical opinion about the Bard over the previous three centuries. He concluded:


‘The mistake to which we … are subject is to praise him at all. No words said of him are more exactly true than those of one who, in the last generation, was his most impassioned lover and most eloquent interpreter. After exhausting on Shakespeare all hyperboles of laudation, all glitter and pomp of rhetoric, Swinburne, as a poet and not as a panegyrist, wrote of him more simply what is the last and the unsurpassable word:

‘“His praise is this, he can be praised of none. Man, woman, child, praise God for him; but he Exults not to be worshipped, but to be. He is; and being, beholds his work well done.”

‘“I cannot last ever,” says Falstaff, in one of his crossflashes of wit and insight: “it was alway yet the trick of our English nation, if they have a good thing, to make it too common.” But there are some good things that cannot be made too common, and that do last ever. One of these is Shakespeare.’