Report on visit to Germany by Sir Harold Bell and Sir Charles Webster, 1947 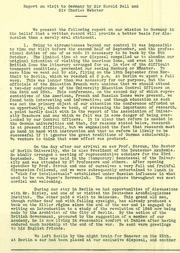 FROM THE BRITISH ACADEMY ARCHIVE

In September 1947, the President of the British Academy, Sir Harold I Bell, and Sir Charles K Webster (who would succeed him as President), visited Germany in order to enquire into the state of scholarship there in the aftermath of the Second World War. On their return they produced a 6-page typed report of their findings.

They discovered that a particular problem was the lack of books. ‘Of all the University libraries in Germany only five, Erlangen, Greifswald, Halle, Heidelberg, and Tübingen, are undamaged; at Cologne and Marburg the damage is slight. Some, like Bonn, Giessen, Hamburg, Munich, and Würzburg, are totally destroyed. Seminar libraries, municipal and state libraries, have suffered equally. Even where no serious damage has occurred the isolation of Germany from the rest of the world has entailed the almost total lack of recent publications; indeed more than one person stressed the difficulty of even discovering what works of importance had appeared during the war.’

But they revealed less material difficulties too. ‘So far as our observation extended it would seem that it has been easier to resume research in classical and humane studies than in mediaeval and modern history. A greater proportion of teachers in the last subject, which was already in a somewhat precarious position, were removed by the Nazis and of those who remained a greater proportion identified themselves with the Nazi régime and cannot therefore be now allowed to continue in their posts. It is very difficult to find younger men to take their place and there seems a certain reluctance for teachers to specialize in the 19th and 20th centuries and thus be compelled to put forward views which may be considered by one or more of the parties of the present day as hostile to their purposes. Nevertheless in our discussions we pointed out the necessity for the objective study of recent modern history and in particular the period 1919-1939. When this point was made, there was generally full agreement, but it is perhaps natural that there seemed to be little sign of preparation for such study.’

BA570. Thanks to the British Academy’s archivist, Karen Syrett, for finding this document.

[This text was originally published in British Academy Review, Issue 26 (Summer 2015). The original document may be downloaded as a PDF file.]