Frida Mond: A good friend to the British Academy 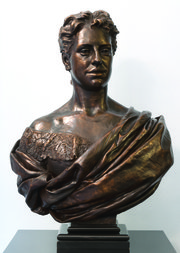 Frederike (Frida) Löwenthal was born in Cologne in 1847. In 1866, she married her cousin Ludwig Mond (b. 1839), a young industrial chemist. The couple moved to England in pursuit of Ludwig’s blossoming business interests in 1867. In 1873, Ludwig Mond went into partnership with John Brunner to form the company Brunner Mond & Company. Ludwig’s scientific and commercial achievement can be measured by the fact that his son Alfred would later (in 1926) merge this business with three others to create the industrial giant, Imperial Chemical Industries (ICI).

Growing financial and commercial status was accompanied by increasing social standing for both Ludwig and Frida Mond, and a growing role in the worlds of learning and the arts. Ludwig’s scientific eminence and curiosity were matched on Frida’s part by an equally passionate enthusiasm for literature and art. And in these cultural interests she was aided and abetted by her gifted former schoolfriend Henriette Hertz (b. 1846), who had been summoned from Germany to keep her company in England, and had remained with her ever since. Ludwig, Frida and Henriette were able to lead a lavish life of travelling, entertaining and collecting. They regularly wintered at the Palazzo Zuccari in Rome, which they turned into a centre of cosmopolitan intellectual life in the city.

Ludwig’s death on 11 December 1909 left Frida Mond a wealthy widow. Two months later, Frida wrote to the Secretary of the British Academy to offer the body financial assistance. Established by Royal Charter in 1902, the British Academy was still a young body and lacked funds to pursue all its aims.

Frida Mond was well aware of the British Academy: in 1907, Ludwig’s niece, Miss Constance Schweich, had made an extremely generous donation to the Academy to establish a fund devoted to the furtherance of research on ‘Ancient Civilization with reference to Biblical Study’. And Frida personally knew Israel Gollancz, who was Secretary of the British Academy, and also Professor of English Language and Literature at King’s College, London. In 1910, Gollancz would marry Alide Goldschmidt, the niece of that same Henriette Hertz who was Frida’s best friend.

On 18 February 1910, Frida Mond wrote to Israel Gollancz: ‘I desire to offer through you, for the acceptance of the British Academy, the sum of £500 a year for at least three years, to form the nucleus of a Fund (which it is hoped will be augmented by others donors, so that in time an annual income of about this amount may accrue) to be devoted to the furtherance of research and criticism, historical, philological, and philosophical, in the various branches of English literature, including the investigations of problems in the history and usage of English, written and spoken, and textual and documentary work elucidating the development of English language and literature.’

Frida explained that she was prompted to offer this gift particularly ‘to give expression to the widespread feeling of gratitude to the British Academy for the effective and dignified manner in which the Milton Tercentenary Commemoration was organized and carried out.’ In December 1908, the British Academy had successfully risen to the challenge of leading the national commemoration of the 300th anniversary of John Milton’s birth, organising an impressive series of events. This bold initiative had clearly been successful in raising the Academy’s profile.

The first page of Mrs Frida Mond’s letter of 18 February 1910 to Israel Gollancz, Secretary of the British Academy, offering to start a fund for the study of English language and literature. (BAA/EVS/3/1)


Frida had two specific wishes for the use of the fund. The first was the establishment of a public ‘Shakespeare oration or lecture, to be delivered on or about April 23rd, on some Shakespearian subject, philosophical, historical, or philological, or some problem in English dramatic literature or histrionic art, or some study in literature of the age of Shakespeare. In order to emphasize the worldwide devotion to Shakespeare, any person, whether man or woman, of any nationality, shall be eligible to deliver the Shakespeare oration or lecture.’

The second wish was for a lecture on English poetry, ‘to be called the Warton Lecture, as a tribute to the memory of Thomas Warton, the first historian of English poetry, whose work not only led the way to the scientific study of English literature, but also stimulated creative genius, and played no small part in the Romantic Revival’.

At the Annual General Meeting in June 1910, the Academy’s President publicly tendered thanks to the ‘anonymous donor’ for this gift (Frida had requested that ‘for the present I wish the donation to be anonymous’). The first Warton Lecture on English Poetry was delivered on 16 November 1910 by Professor W.P. Ker FBA, on the subject of ‘Thomas Warton’. The first Shakespeare Lecture was delivered on 5 July 1911.

An invitation to the inaugural British Academy Shakespeare Lecture, delivered on 5 July 1911. The British Academy did not have a permanent home of its own until 1928; in its early years, the Academy held public lectures in the Theatre at No. 6 Burlington Gardens. The lecture was held on the evening of the Academy’s Annual General Meeting, at which meeting the lecturer, J.J. Jusserand, was elected a Corresponding Fellow of the British Academy. (BAA/EVS/9/1/1)


[In 1913 Frida Mond was to lose her great companion, Henriette Hertz. A bequest to the British Academy from Miss Hertz established a fund that was intended both to support three new lecture series, and more generally to enable the Academy to support scholarly research and publication.]

In 1920, again through the offices of Sir Israel Gollancz (he had been knighted in 1919), Frida Mond offered the Academy ‘the sum of £1200 as a further contribution towards the English Language and Literature Fund’, with a particular emphasis on securing the future of the Shakespeare Lecture series. She made this new gift ‘in appreciation of the manner in which the Shakespeare Lectureship and the Warton Lectures have been carried out’, and further specified that ‘some portion of it is to be allocated for administration of the Fund.’

Mrs Frida Mond died in May 1923. In her will, she left ‘to the British Academy two thousand pounds for the endowment of a Lecture & Prize on subjects connected with Anglo-Saxon or Early English Language & Literature, English Philology, the History of English Literature and cognate studies, on conditions so far as shall be practicable drawn up for me by Sir Israel Gollancz, with whose name it is my wish that this foundation shall in due course be associated, in token of a highly valued old friendship, and his efforts to further these studies’. When circulating his proposed conditions for operating the fund to members of the Academy’s Council in October 1923, Sir Israel wrote ‘As regards the personal condition in respect of myself attached to the Bequest, I have asked that this condition be in abeyance during my lifetime’.

The inaugural ‘British Academy Lecture on English Philology and Literary History’ was delivered in 1924 by Sir Israel Gollancz himself, on ‘Old English Poetry’. The first ‘Biennial Prize for English Studies’ was awarded in 1925 to Professor Joseph Wright FBA, for his contributions to English philology, and more especially for his English Dialect Dictionary and English Dialect Grammar.

Frida Mond also bequeathed to King’s College, London – again through the Israel Gollancz connection – two large marble statues of Sophocles and Sappho, and a collection of literary memorabilia relating to Goethe and Schiller.

In 1930, Israel Gollancz himself died. From that year onwards, both the lecture and the prize established through Frida Mond’s bequest would bear his name. And in 1930 his widow presented to King’s College a bust of Frida Mond that had been in Gollancz’s possession. The British Academy now owns and proudly displays a copy of that bust.

The bust of Frida Mond was sculpted in 1886 by Anna Dabis (1847-1927), a fellow German émigrée and one of Frida’s many artistic protégés. The British Academy commissioned a copy of the bust in 2011, and it is now displayed at the foot of the grand staircase in No. 11 Carlton House Terrace.

The Mond Society: Continuing a tradition of giving

At the third annual Legacy Lunch in October 2014, the President of the British Academy, Lord Stern, announced the establishment of a legacy ‘club’ – the Mond Society – to recognise and thank those who have pledged a legacy to the British Academy in their will.

The Mond Society is named after Mrs Frida Mond, one of the Academy’s earliest benefactors, and a close friend of its first Secretary, Sir Israel Gollancz. A fuller appreciation of Frida Mond’s contributions to the British Academy is given on the preceding pages.

From its establishment to the present day, the British Academy has had a strong tradition of financial support from its Fellows and friends, and over the years has also benefited from the generosity of those who have chosen to leave a gift in their will to the Academy. All those who choose to demonstrate their support in this munificent way are welcomed to the Mond Society and receive an annual invitation to a lunch hosted by the President, as well as information about Academy activities related to their interests.

The Academy is also pleased to be able to offer a free, simple will-writing service through the National Free Wills Network. This service is available to all Fellows and friends, and comes with no obligation. For more information, or to discuss your plans, please contact Jennifer Hawton, Development Officer, on j.hawton@ britac.ac.uk or 020 7969 5258.