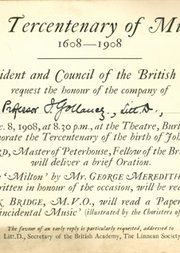 ‘John Milton: A Symposium to Commemorate the Quatercentenary of his Birth’ was held at the British Academy on 6 December 2008. Milton’s standing is unparalleled in English culture – as the greatest English poet after Shakespeare; as an important political, moral, and theological contributor to the intellectual debates of the Civil War and Commonwealth; and as a far-reaching influence on the poetry and political thought of subsequent generations. The symposium, convened by Professor Paul Hammond FBA and Professor Blair Worden FBA to appeal to a broad audience, featured eight papers on various aspects of Milton’s rich and diverse legacy. The occasion concluded with a memorable poetry reading by Geoffrey Hill.

The British Academy also played a prominent role in marking the 300th anniversary of Milton’s birth. As described in the previous article, in its early years the Academy needed to establish its identity. Sir Frederic Kenyon would later write that Israel Gollancz, the Academy’s first Secretary, ‘seized any opportunity that presented itself for bringing the Academy into the public eye. A notable early example of this was the celebration of the Milton Tercentenary in 1908. ... [A]s no society then existed with better claims to take the lead, Gollancz seized the opportunity to procure from influential quarters an invitation to the Academy to discharge this national duty’ [note 1]. The undertaking ‘greatly increased the prestige of the Academy’.

The letter inviting the British Academy to initiate arrangements was signed by the Lord Mayor of London; the Chairman of the London County Council; the Vice-Chancellors of the Universities of Oxford, Cambridge and London; the Master of Christ’s College, Cambridge (where Milton had been a student); the High Master of St Paul’s School (where Milton had been a pupil); and the Trustees of Milton’s Cottage at Chalfont St Giles. In January 1908, the New York Times reported excitedly that ‘proposals of a definite nature’ were to be laid before ‘British Academy officials’: ‘such early discussion of the plans seems to indicate that the event will be celebrated on a grand scale.’ A committee was set up to consider the proposal that ‘the British Academy should initiate a movement for the Commemoration of the Tercentenary’; in February, it reported the further coup that celebrations planned by Christ’s College, Cambridge, were to be brought forward (to July 1908), ‘so as not to clash with the Academy’s proposed celebration in London’.

The opening meeting of the celebrations, on 8 December 1908 (the eve of the actual Tercentenary date), was held in the Theatre, Burlington Gardens, ‘attended by a large representative gathering’. The New York Times reported that ‘Those who assembled at the celebration included men most prominent in art, science, and literature and the learned professions. Whitelaw Reid, the American Ambassador, and the Ambassadors of the other powers, also attended. The British and American flags were entwined over the platform.’

Invitation to the opening Tercentenary event on 8 December 1908, addressed (in his own handwriting) to Israel Gollancz, the Secretary of the British Academy, ‘& Lady’.

Dr A. W. Ward, Master of Peterhouse and Fellow of the Academy, delivered ‘a fitting oration’ on Milton and his ‘soaring genius’: ‘the English people and the English-speaking world to whom the inheritance of these works has descended are at one in cherishing them with grateful reverence.’ The organist, composer and conductor, Sir Frederick Bridge, read a paper on ‘Milton and Music’, with vocal illustrations by the choristers of Westminster Abbey (instrumental music supplied by the Grimston Quartet).

At this meeting, too, were read lines composed for the occasion by the novelist and poet, George Meredith, OM – ‘A voice that down three centuries onward rolls; Onward will roll while lives our English tongue ...’ The President of the British Academy later noted, ‘A certain pathos attaches to these lines when we remember that they were almost the last contribution to literature from the pen of that great writer’ (Meredith died in May 1909).

The Lecture Theatre at No. 6 Burlington Gardens, when it was home to the University of London – this 1871 image is from the Illustrated London News. In 1902 the building was taken over by the Civil Service Commission, which continued to hire out the lecture theatre for lectures and theatrical performances. Later the theatre space would be divided up into rooms on two storeys; and in 1928 the British Academy moved into the lower part, finally securing for itself a permanent home which it would occupy for the next 40 years.

The programme of commemorative events also owed much ‘to the kind offices of the Lord Mayor’, who on the Tercentenary date itself (9 December), in the Mansion House, ‘most graciously gave a banquet in honour of the occasion for the Fellows of the British Academy and others.’ Music was provided by students of the Guildhall School of Music.

On 10 December 1908, five scholarly papers on different aspects of Milton were delivered at a meeting of the British Academy in Burlington House. There was also ‘a remarkable musical service’ at Bow Church, Milton’s parish church, at which the Bishop of Ripon preached the sermon. Back at the Theatre, Burlington Gardens, on 15 December a performance of Samson Agonistes, directed by the actor and theatrical manager William Poel, brought the Tercentenary programme to a close.

All the addresses and papers presented during the celebration were subsequently published in the Proceedings of the British Academy [note 2].

In his address to the 1909 Annual General Meeting, the Academy’s President reported on the Tercentenary celebration, and declared that

‘the British Academy may be congratulated upon the success which attended it.
I venture to think that nothing could have been carried out in better taste. There was a general feeling that the ceremony should not be allowed to lapse into anything that might be considered an extravagant demonstration; and all who were engaged in the celebration were influenced by the consciousness of discharging a pious duty in memory of one of the greatest and most revered names in English literature’ [note 3].

At the John Milton Quatercentenary symposium, held at the British Academy on 6 December 2008, the poet and emeritus professor Geoffrey Hill read selections from Milton’s work and from his own poetry.
Recording of Geoffrey Hill’s poetry readings

The 2008 symposium was one of the first to be hosted at the British Academy under the Academy’s new Conference Support scheme.