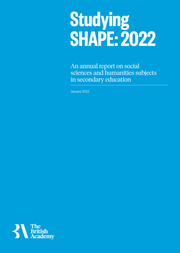 'Studying SHAPE: 2022' is the first in an annual series of reports providing a snapshot of the number of students undertaking the most common secondary and further education qualifications in the UK, in humanities and social science subjects. This work expands upon the initial commentary already provided by the Academy following A level and GCSE results and, alongside other resources available through the British Academy’s SHAPE Observatory, supports the Academy’s role in providing objective data on the health of SHAPE disciplines.

For the purposes of this pilot report, our analysis focuses on those SHAPE subjects in the social sciences and humanities which are aligned with the subject Sections into which the Fellowship of the British Academy is organised. In this first year, we are piloting our approach across this report and accompanying resources, and plan to build on the methods and nature of the analysis across subjects for future years.

This report considers data on A level and GCSE entries in England, Wales and Northern Ireland, as well as at National 5, Higher, and Advanced Highers in Scotland, analysing trends in student numbers over a ten-year period (or six-year period in the case of Scottish qualifications, following the introduction of new and updated qualifications between 2013 and 2016). It looks at changes to absolute numbers as well as relative shifts in the popularity of subjects.

To support this analysis, the Academy has also launched SHAPE Indicators, a data visualisation resource which brings together vital statistics on the health of the humanities and social sciences, offering additional subject-level visual analysis, which can be used alongside the analysis and figures presented in this report. Together, these resources provide government, policymakers, journalists, the UK’s disciplinary communities, the public and those working in the higher education sector with an accessible evidence base for the subjects.

GCSE trends across the social sciences and humanities

Looking at the social sciences and humanities respectively as subject groupings, we find that both have shown positive trends at GCSE level in the decade since 2012.

There has been above average growth in social science GCSE entries, compared to entries across all GCSE subjects, since 2012, and above average growth in GCSE humanities entries since 2016. The share of social sciences and humanities GCSE entries likely reflect curriculum requirements and individual school policies at this level of education in England, Northern Ireland and Wales.

Humanities GCSE entries were subject to falls in numbers between 2013 and 2016, before recovering thereafter. GCSEs in social science subjects have shown consistent growth over a ten-year period, but were starting from much smaller overall numbers and still only make up a relatively small percentage of all GCSEs.

A level trends across the social sciences and humanities

For A levels, percentage changes were similar for social sciences and humanities up until 2015, after which point, they have been subject to contrasting trajectories.

Entries to social science A levels have risen considerably despite the 18-year-old population declining for most of the period.

Humanities A level entries, on the other hand, have seen quite consistent decreases since 2015, at a rate that is disproportionate to wider demographic shifts.

It is harder to identify any clear trends in Scotland since 2016, due in part to the fact that the dataset here is smaller. Both social science subjects and humanities respectively have been subject to minor fluctuations since 2016. The only exception to this appears to be a more marked growth in social science National 5 entries between 2020 and 2022.

Both social sciences and humanities have seen decreases in the number of entries for Highers. Entries for Advanced Highers saw some minor decreases between 2016 and 2019 for each subject grouping, although this was largely in line with percentage changes in the Scottish 18-year-old population. Since 2019, both subject groups have exceeded their 2016 total for entries, with an increase for social sciences.

In Scotland, there have been increases for some humanities subjects across all qualification levels since 2016, particularly Chinese. The picture for other, larger subjects has been more mixed, with declines in numbers for History, Philosophy and particularly in French and German since 2016.