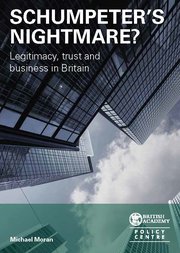 Written by Professor Michael Moran FBA – Professor of Government and Business at the University of Manchester – the report examines whether the current mistrust and disgruntlement towards British business is just a straightforward reaction to the recent financial crisis or whether this is part of a longer term decline that could threaten its long term survival, as predicted in the 1940s by renowned Austrian economist, Joseph Schumpeter.

Drawing on the work of some of the twentieth century’s most influential thinkers, Professor Moran explores the growing pressures on business, how they have responded to these pressures and the apparent contradiction in the public’s mistrust of “big business” but willingness to place a surprising amount of trust in particular institutions and business personalities.