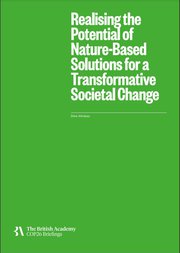 To unpack the transformative potential of NbS, this brief synthesises the current state of knowledge surrounding nature-based solutions. It maps the overall landscape of NbS, including the challenges which NbS can address, the policy frameworks which drive NbS approaches, and the enabling conditions which support NbS implementation. Accordingly, it aims to answer the following questions:

Concerning the evidence base for NbS, the brief also introduces two interactive digital maps of global NbS practices. The development of the two complementary platforms was supported by the British Academy and produced in partnership with the Nature-based Solutions Initiative (NbSI) at the University of Oxford and the Department of Environmental Sciences and Policy Department of Central European University. The maps aim to demonstrate the variety of NbS implemented in different urban and rural areas around the world and showcase their potential to address multiple sustainability challenges, including climate change.

In preparation for the UN Biodiversity Conference in Kunming, China (CBD COP15) and the UN Climate Change Conference (UNFCCC COP 27) in Sharm El-Sheikh, Egypt, the brief concludes with a set of policy recommendations for promoting the use of nature-based climate solutions.