A presumption against imprisonment: social order and social values 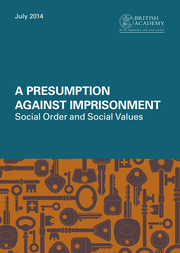 The discussion was centred around the British Academy report, A Presumption Against Imprisonment: Social Order and Social Values (click link to download report), which explores the reasons behind the high prison population in the UK. Delegates debated how why and how we should try to reduce both the number of people we imprison, and the length of time for which many are imprisoned.