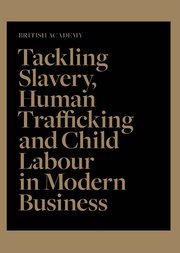 ‘Modern slavery’ is a relationship based on severe exploitation – often, though not always, economic exploitation. It is defined by a range of ‘slavery-like practices’, which can include forced or compulsory labour, servitude, forced or servile marriage, the sale or exploitation of children, human trafficking, and debt bondage. In all instances, this exploitative relationship is characterised by the control over a person through the prospect or reality of violence, and is enabled by a poor human rights framework.

Recognising the existing evidence gap, the British Academy has initiated a new programme, ‘Tackling Slavery, Human Trafficking and Child Labour in Modern Business’, with support from the UK’s Department for International Development. The programme aims to promote ground-breaking research and make evidence widely available and accessible to those seeking to develop and support more effective policies, business models and interventions in relation to Sustainable Development Goal 8.7. This programme has funded eight innovative and interlinked research projects which seek to identify promising practices and share knowledge about what works at scale in different contexts.