From asking why to thinking how: emerging challenges for urban climate action 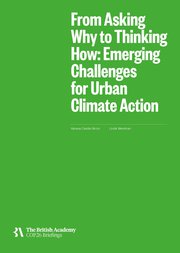 The latest special reports from the Intergovernmental Panel on Climate Change suggest that more forceful action will be required to keep the world on a sustainable development pathway, keeping global average temperature changes under 1.5 degrees Celsius. Urban climate action is needed to step up climate change ambitions. Empirical evidence shows that diverse actors, including local governments, private enterprises and communities, are already responding to climate change in cities and settlements. At the same time, the rapid pace of urbanisation in many regions of the world cast urban climate action as a race against time, as action is directed towards creating new urban infrastructure that avoids carbon lock-in and reduces the structural vulnerabilities to climate change. While the call for urgency is well taken, two challenges related to urban climate action are emerging. On the one hand, the current means to evaluate effectiveness of urban climate action in terms of emission reductions or reduction of risks do not capture the sometimes-imperceptible impacts of action taking place in cities and settlements. On the other hand, there is a risk that urban climate action may lead to unintended negative consequences, when the harms of climate action exceed its potential benefits.