by Kim Bouwer and Joana Setzer 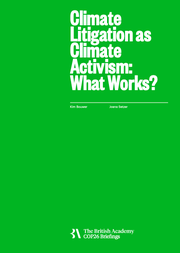 The hopes for and devastating failure of the Copenhagen COP of the UNFCCC in 2009 sparked a new era of climate action that employed a blend of modern digital and traditional physical techniques of confrontational activism. It also re-ignited an interest in the prospects for climate litigation, as the growing frustration of climate activists drove a return to the courts to challenge climate inaction. What is more surprising is that the years subsequent to the conclusion of the Paris Agreement in 2015 have seen an increase in activist legal mobilisation in the Courts, as much as it has other forms of activism. Environmental litigation, as environmental activism, is not a new strategy. Litigation as a technique has been long integrated in environmental activism, pursued in conjunction with other forms of mobilisation.

Over the last few years, climate change litigation has been increasingly used as a tool to influence policy outcomes and/or to change corporate and societal behaviour. This approach sees advocates using climate litigation to drive ambition in climate action, taking a long view beyond the immediate success or failure of individual cases. Claims brought against states seeking increased mitigation ambition have seen some success. Litigation is also being brought against large emitters or states seeking compensation for damages caused by, or costs incurred due to, climate change. High-profile judgments on climate change have attracted considerable media and scholarly attention. These actions seek to leverage pending litigation to instigate broader policy debates and change - for instance, increasing the share of renewables in an energy market or aligning national laws with Paris Agreements targets. While the majority of climate change litigation to date has occurred in the United States and other developed countries, cases raising issues of law or fact regarding climate change are increasingly reaching courts across the world.

In this briefing we examine this wave of post-Paris legal mobilisation. We discuss the who, why, how and what for, of this new wave of activity that has not been quietened by increased multilevel commitments to take steps to manage the climate crisis.