Navigating Inclusion in Peace Settlements: Human Rights and the Creation of the Common Good 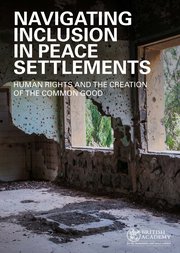 Many recent peace processes appear to have produced an uncertain, and sometimes transitory, peace. This report points to ways in which peace agreements based on compromise and without a clear pre-commitment to the common good tend to institutionalise ‘formalised political unsettlement’, i.e. a situation where the root causes of a conflict are carried into the new political and legal institutions, rather than being resolved. This report argues that human rights commitments can facilitate entry points for the creation of an inclusive political order and suggests a novel approach to the implementation of human rights measures. In so doing, it responds to calls from development and peacebuilding actors for more politically smart tactics with regard to intervention in fragile and conflict-affected states.