The future of the political parties in England 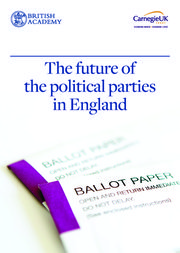 Devolution to Scotland, Wales and Northern Ireland since 1999 has not been complemented by similar measures for England. England has arguably become more centralised since 1999 as local government has been weakened and attempts to establish regional government outside of London were abandoned following the 2004 referendum on this issue in the North East of England. Consequently, England has continued to be governed from Westminster, which is both the UK and English parliament. In recent years, there has been evidence to suggest growing discontent among English people about their place within the Union1, and about the centralised and London-centric nature of the United Kingdom political system. In response, the Conservative-led governments since 2010 have introduced two sets of reforms: devolution to English city-regions, and also English Votes for English Laws (EVEL) at Westminster. Having been a firmly anti-devolutionary party in the 1990s, the Conservative-led governments since 2010 have been responsible for an acceleration of the devolution process across the UK. Scotland, Wales and Northern Ireland have all received additional powers, including over taxation and welfare, while May 2017 saw the election of six metro mayors who have received some powers via bespoke “devolution deals”.