English identity and the governance of England 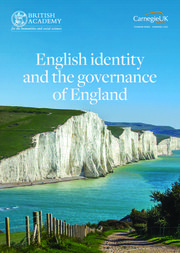 A good place to start discussion of England’s governance is with the aspirations of the English people. But understanding what the English people want or believe is not as simple as it may sound. The views of the English people might include all the people of England, those who identify in some way as English, or those who identify most strongly or exclusively as English. In a democracy, the ‘English people’ must include all those entitled to vote in England. In recent years, several studies have suggested that ‘English’ identity has become more assertive at the expense of ‘British’ identity. There is some evidence of significant differences in values and attitudes amongst English and British identifiers. Some surveys show correlations between national identity and political behaviour, including views on England’s governance. This short paper summarises some of what we know, and what we don’t, about these different identities of the English people.

England and the English after the Referendum