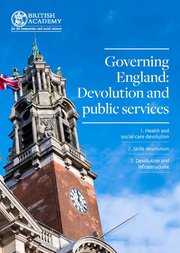 Governing England is a multi-disciplinary programme which seeks to address a number of issues around the government and governance of England. The project was conceived to address the place of England in academic literature at a time when Scotland, Wales and Northern Ireland received increased public and political attention, but the largest member of the Union did not. Since then the 2015 General Election and the 2016 vote to leave the European Union have brought the political preferences of those in England and those who identify as English into sharp relief.

Since 2016 the British Academy has been investigating devolution in England, holding roundtables in eight locations around the country from Newcastle to Bristol. Initially we examined broad issues relating to the devolution settlements and their implications for England. In this second year we have examined devolution in practice, and whether it will affect people’s lives in a way they will notice, with particular reference to key policy areas such as health and social care, skills and infrastructure.

Overall there are three lessons we have taken away from these roundtables. Firstly, nearly all of those who attended them expressed their support for devolution and are keen to see it work. But policy devolution may lead to cries of ‘postcode lottery’.

Secondly, there was widespread agreement on the value of integration and place. We heard that Manchester is putting a great deal of money into mental health services, but this might be wasted if those who use these services get sanctioned and lose their benefits.

Thirdly and finally, we have learnt that politics, structures and frameworks matter less than the people working within these institutions. We heard how health and social care and other services must work together to ensure that the citizens who use them do benefit. We heard about the need for greater collaboration and communication between employers and skills providers so that people’s skills are relevant to the jobs of the present and the future.

With the government promising to publish its Devolution Framework imminently, this publication demonstrates the value of ‘place-based’ interventions and provides some insight in to how these may work.

Read the output of our first year: Governing England: Devolution and Identity.