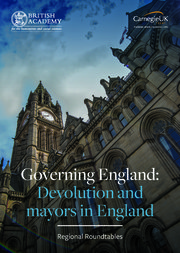 Between November 2016 and April 2017, the British Academy held five roundtable meetings in various locations in England, visiting regions of the country all at different stages of developing devolution deals.

In May 2017, six new metro mayors were elected in the Liverpool City Region, Greater Manchester, Cambridgeshire and Peterborough, Tees Valley, West of England and the West Midlands, with Labour winning in Liverpool and Manchester, and the Conservatives victorious in the other four.

In regions such as Yorkshire a devolution settlement seems some way off. How far these additional deals may get is now in doubt, as the governments led by Rt Hon Theresa May MP have shown less enthusiasm for the flagship policy which was previously championed by former Chancellor of the Exchequer, Rt Hon George Osborne.

Our meetings encountered a range of different views, some cautiously welcoming the advent of the combined authorities, and with them an increase in local powers over skills, transport and infrastructure, and others outlining a concern about the potential for new power-holders upsetting fragile local political balances and partnerships between local leaders.

One constant has been a lack of public enthusiasm for and engagement with the new metro mayors. Confusion has reigned in some regions with a directly elected mayor already, and those who were aware of the new settlements displayed a scepticism as to how much would change for local people.

A range of questions have arisen from our roundtables, including what the future is for those regions outside the patchwork of combined authorities that have now been established and whether the change we have witnessed is real devolution or simply another round of local government re-organisation. There are also questions as to whether the powers and funding given to the new combined authorities will be sufficient to tackle some of the regional challenges, and whether the metro mayors will ever be able to make meaningful change.

Enclosed in this document are the summaries of the findings from the five roundtables. The summaries of the roundtables were written immediately after each event and have been previously published on the British Academy and Institute for government websites. The summaries have not been updated to reflect more recent political events. We hope these make interesting reading, and provide food for thought for government and local actors in the new combined authorities. The British Academy will be working on the Governing England programme for another year and we hope that the findings of this project prove a useful addition to the national debate about our evolving constitution, governance and identity, all at a time of great political change in Britain, and beyond.

Should Every Major City have a Mayor? A British Academy Panel Discussion