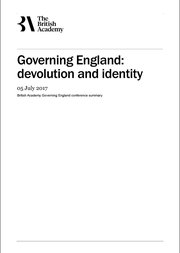 Recent political developments have led to a greater focus on the governance of England and its place within the United Kingdom. The question of English identity has become a particular focus for debate, partly due to the referendum on the UK’s membership of the European Union. The Governing England conference brought together experts and practitioners in various areas related to the governance of England in order to explore these issues. Key questions considered included identity, governance and political institutions.

The first session of the conference discussed how metro mayors have been established to help economic growth, but that they might also play a role in terms of renewing political and democratic engagement, and fostering a sense of ‘area patriotism’. Metro mayors and the combined authorities have been set up on a bespoke basis and the governance of England is now a patchwork with some areas administered by combined authorities and others not, while the powers of these newly created authorities vary considerably. Questions arising from these developments include whether these changes will prove popular in the long term and whether devolution will be extended in future.

The second session of the conference addressed the issue of the representation of England within political institutions, primarily Parliament. The panel discussed the English Votes for English Laws reform, and whether that or other alternatives address how those who identify as English wish to be represented. While English Votes for English Laws is an attempt to allow English MPs to veto legislation affecting England only, with which they do not agree, it does not provide a visible institution or mechanism which can be said to ‘speak’ for England.

The third session showed that political parties have largely struggled with the issue of identity, although the Conservative party has been more successful at securing the support of those who identify as English, and Labour with those who identify as British. National identity becomes more important as more people cast their vote in line with others who share their identity, rather than class or age. Political parties are vehicles to express identity and political preference, and they appear to be evolving as they seek to articulate both.

The fourth session of the conference heard that the government’s commitment to devolution within England appears to have waned since the EU referendum, as well as concerns expressed that Whitehall had yet to adapt sufficiently and was still inherently sceptical about relinquishing control of major public services. It was also pointed out that, given the long history of centralisation within England, the significance of the progress made in recent years toward devolution to city regions and other parts of the country should not be discounted, even if most of the country remains outside of areas with devolution deals.

The fifth and final session discussed Englishness, and what kind of national identity it constitutes.  Identity is changing and evolving, with many different elements playing their part. English identity is no different, and it seems to now be emerging as multiculturalism and immigration have prompted many in England to consider their identity as never before. However, English identity is still ill-defined, so many are struggling with how to best represent England and the English, and English identity is often seen more negatively than other, more inclusive, national identities such as Britishness.

The issue of identity ran through each session. English identity may be felt by many people to be difficult to define and articulate, but identity is central to questions of governance. Many of the institutions of English and British politics are being reshaped in order to better take account of, or capture, English identity, without general acceptance of who the English are and what they want.