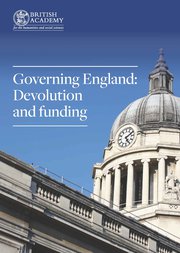 The British Academy’s Governing England programme was established in 2016 to explore questions about England’s governance, institutions and identity. One central focus of this work has been the English devolution agenda, looking at how successive governments have tried (occasionally successfully) to devolve power to England’s cities, towns and regions.

During the course of the programme, the Academy has hosted a series of events across England, which have informed the production of two previous reports. The first, Governing England: Devolution and mayors in England (2017), examined the ‘devolution deals’ negotiated between central government and local authorities since 2015, leading to the election of ‘metro mayors’ in seven English city-regions.

The second, Governing England: Devolution and public services (2018), investigated the impact (actual and potential) of devolution in three important areas of public policy: health and social care, skills, and infrastructure.

A common theme emerging from this past work is that devolution cannot achieve its full potential as a mechanism for transforming the governance of England so long as the system for funding public services and local government remains unreformed and highly centralised. Furthermore, devolution is taking place in parallel with a sustained squeeze on local government budgets, making more urgent the question of how councils should be empowered to fund themselves.

In this context, the British Academy is pleased to be publishing this new report, Governing England: Devolution and funding. It comprises five excellent new papers which examine how government and public services across England are, have been, and should be funded from a range of perspectives.

1. In the Introduction, Iain McLean places current debates in a historical context and discusses why reform to local government funding arrangements has proven so contentious. He also asks whether now, finally, might be the time for radical change, for instance through some form of land value taxation.

2. Martin Rogers and Alun Evans bring together various data showing how England is funded within the UK and why this arrangement has been criticised. They set out that the majority of public spending in England is funded by revenue from central government, with smaller amounts from local government and the EU.

3. Next, David Phillips shows how the funding of local government is changing, including how the system is being reformed to place more emphasis on local fiscal incentives while reducing redistribution between richer and poorer areas. At the same time, he notes, healthcare and education funding are increasingly centralised.

4. Aileen Murphy delves into the issue of business rates retention, assessing the suitability of this reform as a method for funding local government. She discusses the main challenges, including the considerable variability in the financial position of local authorities and the fact that increased economic activity is not linked directly to business rate growth.

5. Finally, Tony Travers discusses how England’s city regions have historically been funded, setting out that having been enacted under a highly centralised fiscal system, the recently created combined authorities and metro mayors have too few powers to transform the governance of England.

With the Government focused on Brexit above all else, there is a risk that the English devolution agenda is left in its current unfinished state. This publication should serve as a reminder that vital questions about the finance and funding of local government and public services remain unresolved, and it should help to facilitate a more informed public debate about how the system could be reformed.