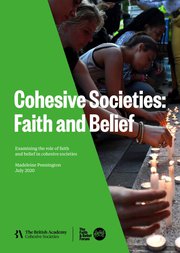 This report explores the role of faith and nonreligious belief in cohesive societies. It charts social cohesion policy in the UK as it relates to faith and belief, and examines the practical impact of the faith and belief sector on communities through a series of case studies.

This report was externally commissioned by the Faith and Belief Forum and the British Academy, and authored by Dr Madeleine Pennington, Head of Research at Theos.

The report makes a contribution to the Academy’s Cohesive Societies programme. This programme asks how societies sustain cohesiveness in the face of rapid political, social, economic and technological change. This report contributes to the exploratory, scoping phase of the programme, which aims to capture existing work in relation to social cohesion under five key themes:

Previous publications in this initial scoping phase of the programme have identified that there is a problematic over-emphasis in UK politics and policy to do with cohesion on security and on the challenges that differences in ethnicity and religion pose for societal cohesion. This has led to an evidence gap on other aspects of the interplay between belief systems and cohesion.

This publication seeks to fill this gap by exploring a wider variety of the different ways in which faith and belief interacts with societal cohesion. It has a particular emphasis on how faith organisations interact with communities. It is not intended as a British Academy policy position, but rather contributes to the overall picture of the evidence base in order to inform a nuanced understanding of cohesion policy.

Professor Douglas Davies FBA
Professor in the Study of Religion, and Director of the Centre for Death and Life Studies, Durham University; Fellow of the British Academy

Professor Tariq Modood FBA
Professor of Sociology, Politics and Public Policy, and Director, Research Centre for the Study of Ethnicity and Citizenship, University of Bristol; Fellow of the British Academy

Find out more about the Faith & Belief Forum on their website.