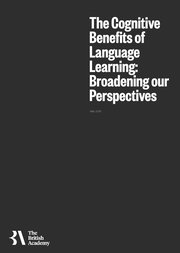 Language learning touches on everyone’s lives. Yet the cognitive benefits of language learning seem to be less well understood. The project Cognitive Benefits of Language Learning: Broadening our perspectives was funded by the British Academy as part of a broader initiative related to language teaching and learning. The project began in March 2016 and finished in January 2018.

The Cognitive Benefits of Language Learning