The Childhood Policy Landscape in Wales: a case study 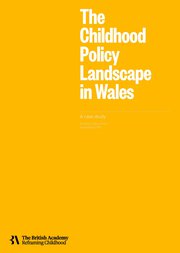 Major factors driving policymaking and outcomes relating to children policy have been identified under three main headings: political, economic, and socio-cultural. Through these wide lenses, significant policy initiatives, as captured in the policy chronologies, have been identified and discussed, highlighting the ways in which Wales is developing distinctive policies within the UK. These initiatives include, for example, the focus on promoting universal children’s rights underpinned by the United Nations Convention on the Rights of the Child (UNCRC); the implementation of extensive reforms of the school curriculum and assessment regimes; the enactment of wideranging legislation designed to enhance well-being of Welsh citizens including children; and the on-going application of a WG child poverty strategy to tackle material and other inequalities across Wales. It is via these policy initiatives, that overarching themes and constraints on policy goals and objectives are also identified and explored. These concern, for example, identifying potential mismatches between WG policy intention and practice, highlighting conflicts and tensions within and between WG policy goals, and identifying data / research gaps for informing policy development. Finally, in the light of this analysis, the case-study identifies broad areas of reflection concerning the future direction of childhood policy in Wales, concerning, for example, the increasingly complex relationship emerging between the ‘rights’ of children as distinct from ‘duties’ to children, and the subsequent distinction and overlap between defining children as citizens, and adults as citizens.