The Childhood Policy Landscape in Northern Ireland: a case study 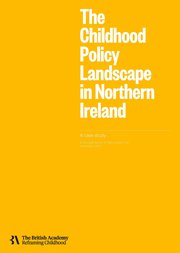 The childhood population of Northern Ireland (0-18) is estimated to be around 450,000; 25% of the total population. The experiences of children in Northern Ireland over time has been significantly impacted by the conflict and its enduring legacy. Policymaking and outcomes relating to children have been shaped by three predominant factors. The first – political factors – has undoubtedly been the most definitive and has had a knock-on effect on factors relating to the broader economic context and socio-cultural dimensions. Each of these will be briefly highlighted to contexualise the case study. The Belfast Agreement of 1998 marked a critical juncture in the development of childhood policy in Northern Ireland, with the establishment of a Northern Ireland Assembly and Executive providing opportunities for nuanced and context-specific policy responses. Some of the main policy initiatives aimed at children and young people that subsequently emerged from that period will be highlighted. This will be followed by a closer look at a number of thematic policy areas, including education, care and protection, social security and youth justice. Progress across most of these has, however, been brought to a halt as a result of the current government suspension, with little indication of when service might resume. Finally, the case study will conclude with reflections on cross-cutting themes and future directions of childhood policy in Northern Ireland.