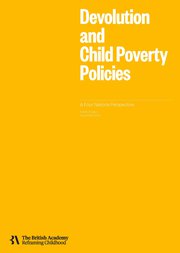 As the greatest cause of child poverty is living in a household in poverty, the concepts of poverty and child poverty are often taken together throughout this piece. The most common measure of poverty is Households Below Average Income which measures the number of households with equivalised income below 60 per cent of the median (For more information see (Department for Work and Pensions, 2018).

The devolved nations of the UK have varied degrees of freedom over policy areas that can impact poverty (Lodge, Henderson, & Davies, 2015). Scotland has the most freedom over social security and fiscal policy while Wales has the least power to diverge from the UK default. Overall, the policy area with the greatest impact on poverty is the economy, powers over which are largely reserved (Welsh Government, 2015). However, several things which impact poverty over the longer term are devolved such as early years provision, schooling, adult skills, housing and public health (McCormick, 2013).

Exploring the approaches that devolved nations have taken to the issue of child poverty highlights different conceptions of poverty and the different policy responses of each nation. There are many, equally valid, definitions of poverty utilised by the different nations of the UK. These include absolute and relative poverty, relative and absolute low income, persistent poverty and other, wider measures which look longer term at things like educational attainment. Policies to prevent or cure poverty will then reflect the chosen measure and the predominant definition in any one place and at any one time.

This is a political choice. The definition of poverty used is significant because policy is largely driven by what is measured (Stewart & Roberts, 2018). Evidence as to the causal impact of policies on poverty can be inconclusive and must be treated with caution (McCormick, 2013).

Overall, child poverty rates fell in the UK nations prior to the economic crash of 2008 but have since worsened (Joseph Rowntree Foundation, 2014). While government policies can be impactful, other factors such as the global economy matter greatly and are beyond the control of governments (Lodge, Henderson, & Davies, 2015). One of the most important impacts on child poverty rates over recent years has been cuts to benefits, some of which are devolved and some not (Portes & Reed, 2018). These cuts have disproportionately impacted households with children (Portes & Reed, 2018).