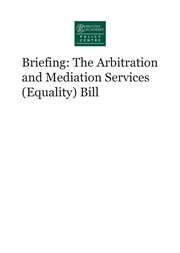 The British Academy Policy Centre has published a briefing to inform debate around the Bill which covers:

The briefing is based on a report by Professor Maleiha Malik that the British Academy Policy Centre, Minority legal orders in the UK. The report and briefing examine the presence of law‐like institutions which are used by members of minority groups within society, misleadingly called ‘parallel legal systems’ but more accurately described as ‘minority legal orders’. It looks at the possible strategies that may be used by the state in dealing with them, and the research evidence available.

All Policy Centre publications put rigorous, peer reviewed academic evidence into the public sphere to open up and inform policy and public debate. Views expressed in the report are those of the author and while not necessarily endorsed by the British Academy, are commended as contributing to public debate.