The Serena Medal is awarded annually for eminent services towards the furtherance of the study of Italian history, philosophy or music, literature, art, or economics. 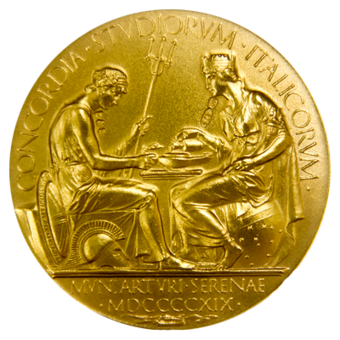 It was endowed by Mr Arthur Serena after Great Britain’s alliance with Italy in the First World War. The medal was first awarded in 1920.

a) In 2021 the Serena Medal will be awarded to scholars in Italian economics.

b) In 2022 eligible nominations must be for scholars in Italian literature.

Nominations for the Serena Medal are currently closed. Nominations will open again in December 2021.

Professor Jill Kraye for her scholarship on Renaissance philosophy and humanism and the later European influence of classical philosophy (Aristotelianism, Platonism, Epicureanism and Stoicism)

Jill Kraye was educated at the University of California, Berkeley, and Columbia University in New York. She is now an emeritus professor of Renaissance philosophy in the University of London and an Honorary Fellow of the Warburg Institute, where she has served in a variety of posts in the library and on the academic staff since 1980. Following a term as a Visiting Professor at the University of Munich, in 2002 she became Librarian of the Warburg, a position she held until her retirement in 2013. She published her first article, a piece on a Platonic work by the Italian humanist Francesco Filelfo, in the 1979 issue of the Journal of the Warburg and Courtauld Institutes; and since 1997 she has been one of the journal’s editors. She is also one of the editors of The International Journal of the Classical Tradition and of the Renaissance section of the Stanford Encyclopedia of Philosophy. Her work on Renaissance humanism and on Platonism, Aristotelianism, Stoicism, Epicureanism and scepticism in Renaissance philosophy has appeared in many contributions to scholarly journals and academic books and has been translated into Italian, French, German, Spanish, Portuguese and Polish; a collection of her essays was published in 2002 as Classical Traditions in Renaissance Philosophy. She was associate editor of The Cambridge History of Renaissance Philosophy (1988) and edited the Cambridge Companion to Renaissance Humanism (1996) and Cambridge Translations of Renaissance Philosophical Texts (2 vols, 1997). The range of her interests is reflected in the volumes she has jointly edited, which include Caro Vitto: Essays in Memory of Vittore Branca (2007), Conflicting Duties: Science, Medicine and Religion in Rome, 1550–1750 (2009), Vernacular Aristotelianism in Italy from the Fourteenth to the Seventeenth Century (2016), The Afterlife of Aldus (2018) and The Marriage of Philology and Scepticism (2019). She has been a co-investigator on a number of research projects funded by the AHRC and the Leverhulme Foundation. In 2018 a group of her students and friends published Et amicorum: Essays on Renaissance Humanism and Philosophy in Honour of Jill Kraye.

“I am enormously grateful and proud to be the recipient of the Serena Medal for 2020. It is an extraordinary honour to have my name appear in a list which includes such giants in the study of Italian Renaissance philosophy as Benedetto Croce, Giovanni Gentile and Paul Oskar Kristeller, along with a host of exceptional scholars whose work I have admired throughout my academic career. I am especially delighted that my approach to the vernacular and Latin philosophy of the Italian Renaissance as an integral part of the classical tradition has been recognized by the British Academy.”