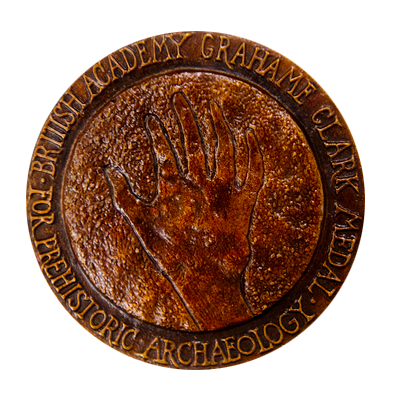 This medal was endowed in 1992 by Professor Sir Grahame Clark (elected Fellow of the British Academy 1951; died 1995). The medal was awarded for the first time in 1993.

Eligible nominations can be for academic achievement involving recent contributions to the study of prehistoric archaeology.

Nominations for the Grahame Clark Medal are currently open and may only be made by Fellows of the British Academy. Entries should be submitted electronically to [email protected] and should state in the email subject line "Nomination 2023 Grahame Clark Medal".

Dr Alex Gibson has been awarded the 2022 Grahame Clark Medal for his significant, much cited, contributions to the study of British prehistory, especially the Neolithic and Bronze Ages.

Alex Gibson is retired Reader in British Prehistory at the University of Bradford. As a schoolboy Gibson visited the many prehistoric sites of his home county, Fife, and dreamed of visiting classical Greece. Torn between Prehistoric Britain and Ancient Greece, he studied Archaeology and Ancient History at the University of Newcastle Upon Tyne before embarking on a PhD on British Beaker domestic pottery at the University of Leicester. In the late 1980s and ‘90s he worked for the Clwyd-Powys Archaeological Trust on a number of exciting projects including the discovery of the monumental Hindwell Neolithic palisaded enclosure and the ritual sites of the Severn Valley which later formed the basis of a pan-Welsh Cadw-funded project. He joined English Heritage’s Centre for Archaeology in Portsmouth in 1998  before taking up a lectureship in the Department of Archaeological Sciences at the University of Bradford, retiring in 2018.
His research has involved Neolithic and Bronze Age settlements, burial and ritual sites and ceramics, and he has prepared numerous specialist pottery reports for archaeological contractors. His major publications include Prehistoric Pottery for the Archaeologist (with Ann Woods), Stonehenge and Timber Circles, The Walton Basin Project and Prehistoric Pottery in Britain and Ireland. He has also edited a number of volumes, most recently The Bell Beaker Settlement of Europe. A longstanding Fellow of the Society of Antiquaries, he has also served as Secretary, Vice-President and President (2014-18) of the Prehistoric Society. He is currently an honorary Research Associate at the University of York, and indebted to the many eminent prehistorians with whom he has worked and from whom he has learned, and he hopes that he may have contributed to their legacies.

“I am both astonished and delighted to have been awarded the British Academy’s Graham Clark medal for Prehistoric Archaeology and sincerely thank the Academy for this honour. Prof Clark was an inspirational archaeologist, respected across the globe. He very much laid the foundations for the modern discipline and his writings are still widely read and used today by archaeologists interested in Prehistory. The list of past recipients of this award reads very much like a celebrity who’s who in the field of prehistory and I am both surprised and greatly honoured to have been chosen to become a member of this illustrious group.”