The Burkitt Medal is awarded annually in recognition of special service to Biblical Studies, for Hebrew Bible studies (in odd years) and in New Testament studies (in even years). 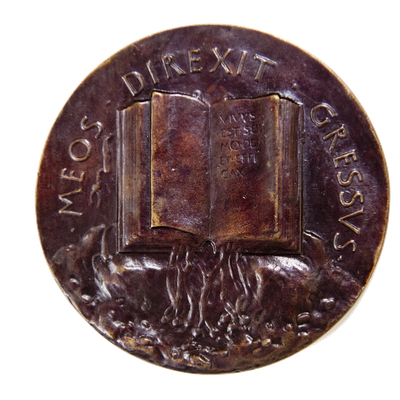 The award was established in 1923 following the decision of Professor Francis Crawford Burkitt (1864–1935), elected a Fellow of the Academy in 1905, to strike a number of bronze medals for presentation by the Academy to scholars of biblical studies. After his death in 1935 the awards became known as Burkitt Medals. The medal was first awarded in 1925.

In 2023 eligible nominations must be for special service to Hebrew Bible studies.

Nominations for the Burkitt Medal for Biblical Studies are currently open and may only be made by Fellows of the British Academy. Entries should be submitted electronically to [email protected] and should state in the email subject line "Nomination 2023 Burkitt Medal".

The deadline for submissions was 31 January 2023. Submissions received after this date will not be considered.

Nominations were reviewed, and the winner selected, by the Burkitt Medal’s panel specialising in Hebrew Bible studies:

Emeritus Professor Richard B. Hays is awarded the 2022 Burkitt Medal for his internationally recognized and influential work on the Gospels, the letters of Paul, and on New Testament ethics.

Richard B. Hays is the George Washington Ivey Professor Emeritus of New Testament at Duke University. Born in 1948 he received his B.A. in English literature (1970) and M.Div. degree (1977) from Yale University. He completed his doctoral thesis at Emory University (1981) which was subsequently published in the SBL Dissertation Series as The Faith of Jesus Christ: The Narrative Substructure of Galatians 3:1-4:11.

Hays was appointed to the faculty of Yale Divinity School in 1981 where he stayed until 1991 when he accepted a professorial appointment at Duke University.  In 2002 he was promoted to a senior chair as the George Washington Ivey Professor of New Testament, a position he held until his retirement in 2018.  From 2010-2015, he served as Dean of Duke Divinity School.

Professor Hays’s work has bridged the disciplines of biblical criticism and literary studies, exploring the innovative ways in which early Christian writers interpreted Israel’s Scripture.  He has also consistently sought to demonstrate how close reading of the New Testament can inform theological reflection.  His most important books include Echoes of Scripture in the Letters of Paul (1989), The Moral Vision of the New Testament: Community, Cross, New Creation (1996), First Corinthians (Interpretation Commentary, 1997), The Conversion of the Imagination: Paul as Interpreter of Israel’s Scripture (2005), Reading Backwards: Figural Christology and the Fourfold Gospel Witness (2014), Echoes of Scripture in the Gospels (2016), and Reading with the Grain of Scripture (2020).

Hays has taken a leadership role in collaborative scholarly projects and in professional societies, including the Center of Theological Inquiry in Princeton. His collaborations with Prof. Stefan Alkier of Frankfurt likewise yielded two co-edited volumes: Die Bibel im Dialog der Schriften: Konzepte intertextueller Bibellektüre (2005) and Revelation and the Politics of Apocalyptic Interpretation (2012).  As Dean of the Divinity School at Duke, he played a significant role in launching Duke Initiatives in Theology and the Arts.

Professor Hays has chaired the Pauline Epistles Section of the Society of Biblical Literature, as well as the Seminar on New Testament Ethics in the Studiorum Novi Testamenti Societas, and served on several editorial boards.

In 2007, Professor Hays received an honorary Doctor of Divinity degree from St. Mary’s Seminary and University (Baltimore, Maryland), and was awarded the Dr. theol. honoris causa from the Johann Wolfgang Goethe University in Frankfurt in 2009.  He is a Life Member of Clare Hall, University of Cambridge.

A special statement of thanks

"I am honoured by the wholly unexpected news that I am to receive the 2022 Burkitt Medal from the British Academy.  I am grateful for this recognition of my work, and amazed to be included in the company of the distinguished recipients of this medal.  It is gratifying to me to note that among those past recipients was Professor W. D. Davies, one of my predecessors in the Ivey Chair at Duke University.

"Because I read English literature as an undergraduate at Yale, I have long held an appreciation and fondness for England’s rich cultural heritage, and I have cherished friendships with colleagues in the UK.  For that reason, it is especially meaningful to me to receive this generous honour from the British Academy.

"As I grow older, I become more aware that all our scholarly pursuits are, as Eliot saw, “a raid on the inarticulate.”  I am grateful that the Academy has recognized my work as a useful contribution to that raiding mission.  My deepest thanks for the award of the Burkitt Medal."