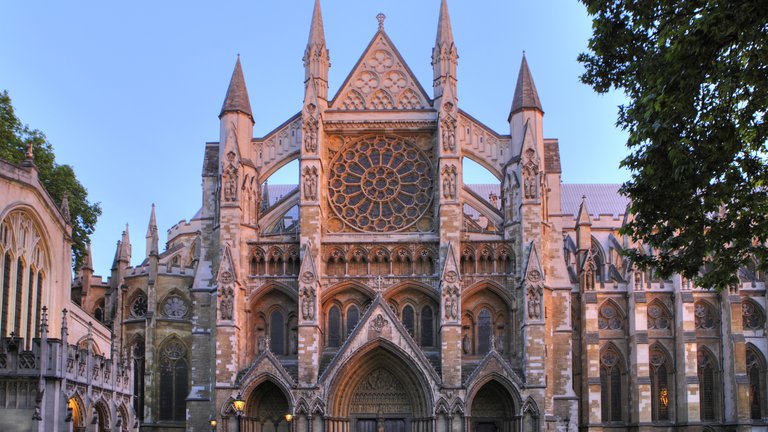 The President of the British Academy, Professor Sir David Cannadine, discusses Westminster Abbey’s unique place in history and its meaning, significance and impact within society both in Britain and beyond.

Hello everyone. I'm David Cannadine and I'm President of the British Academy, the United Kingdom's national organisation representing and championing the humanities and the social sciences.

For this special talk introducing our Summer Showcase, I'm going to say a few words about another great national institution, Westminster Abbey, whose towers can easily be glimpsed from our own headquarters on Carlton House Terrace. It's been a house of prayer and devotion for more than a millennium. It’s a building of outstanding architectural significance and an unrivalled national mausoleum. Its close and lengthy relations with the parliaments and the governments of this country are unrivalled by any other church, in any other nation, and with only two exceptions, every one of our monarchs has been crowned in the Abbey since 1066.

Yet what makes Westminster Abbey so interesting and so remarkable is that this is no simple linear, predictable one-way story.

On the contrary, its long history abounds with paradoxes, contradictions, unexpected terms, disruptive redirections and unforeseen outcomes. The Abbey came into being originally as one monastery among the many founded in the cosmopolitan world of early medieval Catholic Christendom. Yet it was later repurposed as a powerful symbol of a more localised, and more specifically Protestant, national identity. Much of its architecture is quintessentially French in origin and inspiration, but for several centuries Westminster Abbey has been widely regarded as a no less quintessentially English or British architectural accomplishment.

Uniquely among our great churches, Westminster Abbey has no bishop. As a monastery it had been presided over by an abbot and on its re-founding by Queen Elizabeth I as a Protestant church, it was established as what is known as a Royal Peculiar, and has ever since been entirely outside the hierarchy and jurisdiction of the Church of England, its Dean and Chapter answerable to no one but the monarch himself or herself. Although the Abbey’s royal tombs and heroic monuments are unrivalled by any other church in Europe, it's the grave of an ordinary man – the unknown warrior – which in modern times has become the most resonant burial place and an unrivalled tourist attraction. While Westminster Abbey has been in its turn a Catholic monastery and a bastion of Protestantism, it has also been in the forefront of multi-faith dialogue and ecumenicalism since the Second World War. It was Edward the Confessor who was the first monarch to take a major interest in the Abbey. He rebuilt it, he was buried there and he was later magnificently entombed and enshrined. Edward’s successor King Harold was defeated by William the Conqueror at the Battle of Hastings, but he followed Harold in being crowned at Westminster Abbey on Christmas Day 1066. And thus was the tradition invented and the tradition established, that the coronation of our monarchs takes place in the Abbey. The Confessor’s splendid Romanesque church was replaced by an even more magnificent Gothic building constructed by Henry III – the Abbey's greatest architectural patron. And although the western front would long remain uncompleted, Henry's church was dedicated in October 1269 – just over 750 years ago.

These energetic and expensive royal interventions transformed the original monastic foundation into one of the most significant churches in Catholic Christendom. During the reign of Henry III, it became the established burial place for monarchs, their consorts and often their children as well. Across the Abbey’s long history, the pivotal era was that of the Tudors. Henry VIII converted the monastic foundation into a Protestant cathedral, no longer under papal jurisdiction, and replaced the abbot and the monks with a Dean and Chapter. Edward VI re-founded it as a subordinate cathedral to neighbouring St. Paul's. Queen Mary reversed these changes and temporarily restored the Benedictine monastic community in her drive to re-establish Catholicism, but Elizabeth I re-established the Abbey again as a Protestant church under her royal control. But the execution of Charles I, the abolition of the monarchy, the disestablishment of the Church of England, and the replacement of the Abbey's Dean and Chapter as its governing body by a parliamentary committee ushered in a new and completely different world in the mid-17th century. Perhaps unexpectedly, the house of Kings had been superseded by the house of Regicides, in which were interred such parliamentary paragons and military heroes as John Pym and Oliver Cromwell.

But with the restoration of the monarchy and the Church of England, the Glorious Revolution and the Hanoverian succession, the Abbey resumed its role as the preeminent royal and state church, as if the Cromwellian interregnum had never happened. Purcell and Handel composed notable coronation anthems and the west front was belatedly completed with the construction of two towers designed by Nicholas Hawksmoor. But George II would be the last monarch to be buried in the Abbey, and the ensuing decades were a time of religious and institutional torpor – worldly Dean's holding plural livings, uninspired services and preaching, and more tourists and monuments but less religiosity.

Nevertheless, to another turning point. From 1863 to 1881, Arthur Penrhyn Stanley was a transformative Dean, who made the Abbey a place of broad, liberal and welcoming churchmanship with better sung services and memorable preaching and with grand public funerals and yet more monuments. As a result, the Abbey became increasingly central to the life of the nation as a whole. Especially the imperial nation that the United Kingdom had become by the end of Queen Victoria's life.

It was in some ways the reign of her successor, Edward VII, that witnessed the apogee of imperial consciousness. George V's coronation was even grander and yet more imperial than his father's. But the First World War was as much a turning point for the Abbey and the monarchy as it was for the British nation and the British Empire. In its immediate aftermath, the Unknown Warrior was buried in the presence of the sovereign, and his grave became a place of popular pilgrimage. Soon after, royal weddings were returned to the Abbey, where they hadn't been held since medieval times and only rarely then.

In more ways than one, it's been a very long, varied and unpredictable journey from the monastery that housed the shrine of Edward the Confessor, to the church that housed the grave of the Unknown Warrior.

At one and the same time, Westminster Abbey is very royal but also very popular. It is very sacred yet also very secular. It's very old but with a constant capacity to renew and reinvent itself. It is the setting for great ceremonials focused on the monarchy and royal family, the like of which occur in no other church in Christendom today. Yet it also remains a place for private devotion and prayer and worship.

Like Westminster Abbey, the British Academy's headquarters on Carlton House Terrace are at present closed. But we very much hope you will come to visit both places when they are open again, as surely sometime, they will be. Meanwhile, our fellows and our funded researchers have shown great imagination and flexibility in exchanging their lecterns for their laptops – and that's especially so in regard to this year's annual Summer Showcase. Featuring live talks and performances, our free festival of ideas, brings to life some of the best and most exciting research in the humanities and social sciences that you could watch and engage with in the comfort of your own homes. Whether you want to learn about the psychology behind the strange but widespread practice of hoarding, or watch a food historian make a pie fit for a king who might have been newly crowned in Westminster Abbey. We believe we have got something interesting and appealing for everyone.

And so it gives me real and great pleasure to launch this year's Summer Showcase officially and to launch it now. To view the content, you can visit the British Academy's website thebritishacademy.ac.uk or follow the links underneath this video. And do keep an eye out for live events also taking place across the next few days. Thanks so very much for watching.