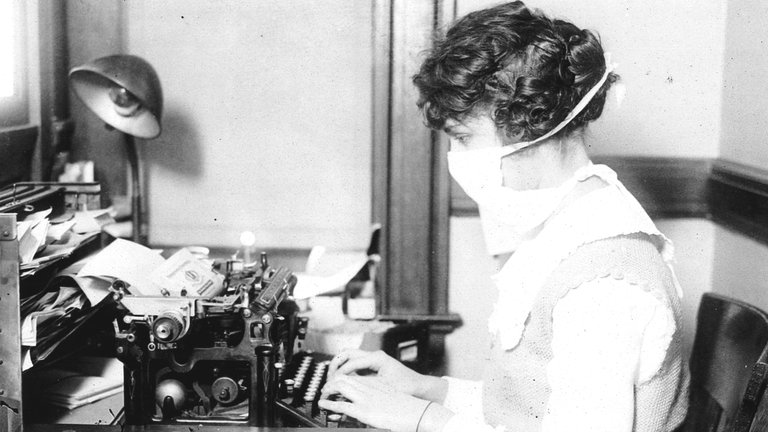 Professor Sir Hew Strachan FBA discusses the challenges the flu epidemic presents for the modern historian and provides some context for our own predicament today.

Hello, my name is Hew Strachan and I’m a Fellow of the British Academy, the national body for the humanities and social sciences.

I am also a military historian and I work predominantly on the First World War. One of the observations I’ve made over the last few months, as we have been collectively addressing the coronavirus crisis, has been the frequency with which commentators have referred to the precedent of the Spanish flu, the epidemic that swept the world in 1918 and 1919. I’m struck when I read the accounts of those that I’m interested in – admittedly politicians, statesmen, soldiers, sailors and so on, more than doctors or epidemiologists – I am struck by how much or how infrequently they refer to the flu when they are talking about the events with which they are preoccupied. They were after all living through a perfect storm. Not just a pandemic as we confront a pandemic, but also a war which had been going on since 1914, the peace process that followed as a result of coming out of that war – which was not itself without violence and difficulty. And revolution and civil war began of course in Russia in 1917, and continuing on through the process of peace-making which continued right up until 1923, not being finalised until the treaty with the Turks at Lausanne later that year.

There is a series of obvious questions here. Questions like: did the war end sooner because of influenza? Was revolution and civil war promoted in part by the flu? Was the peace process, which some people, wrongly in my view, would see as contributing to the outbreak of the Second World War, botched because of influenza? These are all pertinent questions, to which I’m afraid in 10 minutes I’m not going to be able to give very full and satisfactory answers. I want at least to explore the issues and point the way to understanding some of the challenges which the flu epidemic presents for the historian and perhaps also to provide therefore some context for our own predicament today.

First of all, let's just look at the flu pandemic itself. It hit the world in three waves. The first wave was in April 1918. It was remarkable, not so much for the scale of mortality, but for the rapidness with which it killed those whom it affected. People would be well one moment and dead the next. The second wave, which caused the vast majority of deaths, 90 percent of all of the deaths, came in the autumn of 1918, in September, October, November. The third wave followed in the first half of 1919. It was more persistent, it ran on for about six months, but was less intense and less lethal. And at the end of it, those states which were counting, those which had statistic departments or offices, reckoned that in all there had been 21 million deaths. We now know that to be a gross underestimate because it excludes those states which were not counting, which were not paying attention to how people died or providing reports on rates of mortality. Today, the calculation would be about 100 million deaths, far worse than anything we have experienced. That is based on the calculation of excess mortality. Particularly including those countries which were, by the standards of the day, comparatively underdeveloped. Whether you take 21 million or 100 million, those figures exceed the death rate normally attributed to the First World War itself – normally attributed to the fighting. Roughly 10 million military deaths occurred between 1914 and 1918. Not all those deaths were as a result of battlefield loss. More importantly, we cannot now satisfactorily conclude how many civilian deaths there were in addition to the military deaths. An economist working in 1921, just after the war ended, argued that the civilian deaths had exceeded the military deaths. As a result, in 1933 one commentator reckoned that there had been 13 million civilian deaths in the First World War.

By 1942, Quincy Wright, an American professor, reckoned that there had been over 40 million deaths in the First World War, either military deaths or deaths caused by disease which had been promoted by the war. What is striking here is that there was therefore a tendency in the 1920s and 30s to look at flu-related deaths as part of the war as a whole – as part and parcel of a wider catastrophe. We would not do that today, partly because flu hit neutral states just as hard as it did belligerent states. But what it does mean is, if you do aggregate, you are likely to produce a figure of something like 120 million total deaths of the First World War: 100 million from influenza, if you take the current high figure, 10 million military deaths, roughly 10 million civilian deaths, which is twice the highest figure we normally run with today for the Second World War, which is seen as, and was, a much more lethal conflict than the First. Clearly, that will be wrong.

The problem here is we're doing a fair amount of double counting and in particular, what we are doing is including in the military deaths those who died of disease, including thousands who died of influenza. So we need to think of a lower figure. The reason that those contemporaries saw these phenomenal deaths in war and deaths from disease as related was that in many respects, of course they were related. Think for a moment just about how the war ended. That second wave – the one with the biggest impact – hit the war as it reached its climax. The Allies were waiting for the arrival of the Americans, who they reckoned would help them win the war in 1919. The Americans had to weigh up whether to continue shipping American soldiers to Europe, given the dangers of the quick spread of influenza aboard ships and in barracks, and in training and the trenches. They decided to go ahead nonetheless, but as a result America had something like 800 000 military cases of influenza, of whom possibly 44 000 died.

They weren't the only ones with the problems. Germany in September 1918 had 600 000 soldiers hospitalised, of whom about two-thirds were suffering from influenza. That meant that when, in September 1918, the Allies achieved a breakthrough on the Balkan front in Macedonia, they were unable to shift troops from the Western Front, from France to the Balkans, in order to shore up the front. That was partly of course because of battlefield casualties, but it was also because they had too many men suffering from sickness. The Allied commander on the Balkan front thought that he might be able to break through to Vienna and even, in his more optimistic moments, to Berlin, and so win the war. But he was unable to do so in part because of influenza. He had two divisions entirely out of action in October 1918. So when Douglas Haig, the British Commander-in-Chief in October 1918, urged his fellow Allied generals to accept the German offer of an armistice, he may well have had the flu epidemic at the back of his mind. After all, if mortality rates had gone on at that level, the chances of winning the war in 1919 would have been considerably reduced.

When the peacemakers arrived in Paris, they were facing a less virulent disease, but still, as I’ve already said, a persistent one. One American observer said everybody has either had the flu or is about to get the flu, or currently has it at the moment. One of those who got it was Woodrow Wilson – the American president. He was hit by a stroke six months later and was effectively disabled and finished as a politician. And then there is the issue of revolution or civil war, which ran on for much longer and which threatened to engulf not just Eastern and Central Europe but possibly even Britain and France. Flu here was interacting with the hunger of Europe – 400 million starving Europeans, according to the American Food administrator Herbert Hoover in 1919. The fear was that hunger and revolution would feed each other. Death was caused by hunger, caused among those who were already suffering from malnutrition, and indeed from the strains created by crowded housing conditions and so on during the course of the First World War.

Death came in many forms in 1918 and in 1919. One of the reasons why I think that those at the time, and those subsequently have overlooked the impact of influenza, was precisely that death through hunger, death through combat, were things that they could address. They were within the grasp of humanity. Nobody understood the causes of the influenza epidemic, and indeed many still find aspects of the disease and its progression mystifying. As a result, that was something you could do nothing about, and you simply had to accept.

From limited war to total war, lecture by Hew Strachan.

Is COVID-19 a turning point in history? Learning from the past, event for the British Academy featuring Professor Margaret MacMillan Hon FBA.

"How Pandemics Wreak Havoc and Open Minds", article in The New Yorker.