10-Minute Talks: Religion and the history of terrorism 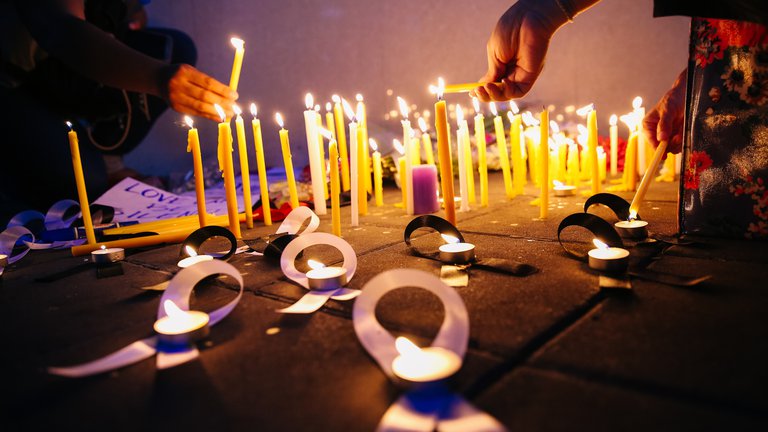 Hello. I’m Richard English, a Fellow of the British Academy. In this short talk, I want to ask four questions about religion and the history of terrorism.

This has had various different kinds: sometimes it's religiously fueled nationalisms that we're seeing here; sometimes it's a more theocratic form of politics and political violence which is being practiced; sometimes there is an individual, redemptive apotheosis involved, but in their complex, various ways, there has been much attention to this. In their complex various ways, there is little doubt that religion has on occasions been a contributory element towards the production of non-state terrorist violence. Less famously, but I think perhaps more importantly, religion has also, on occasions, been an important influence restraining the turn to terrorism and this has occurred across different religious traditions. There are hints at this, in terms of scriptural injunctions towards empathy and compassion within the Christian tradition, for example, Matthew Chapter Seven, Luke Chapter Six. But also within the Christian tradition, if you look at the post-1968 political violence in Northern Ireland, very frequently there were, out of people's religious convictions, religious beliefs, religious commitments, calls for restraint, for non-retaliation, for people not to engage in more behaviour of a callous, terroristic kind. Within the Muslim tradition, many of the most authoritative voices arguing against jihadist terrorism have been voices which have been expressly, explicitly Muslim voices, justifying their hostility to the terrorist violence in explicitly Muslim terms. Equally, within the Jewish tradition, there are very powerful voices that have argued that Jewish faith, Jewish commitment, should fructuate in a reduction of politically motivated violence by non-state actors, rather than by a repetition or an increase.

The Stanford neuroscientist Robert Sapolsky, with a profound expertise in understanding violence, has argued that religion tends to foster both the best and the worst of our behaviours. I think in terms of religion and the history of terrorism, we have perhaps focused more on some of the worst than of the best.

I think there is a huge irenic potential within religion in terms of restraints upon terrorism. That has been the case and I think it could be the case even further in the future and probably deserves more attention than we have tended, many of us, to give it.

Second question: is religious terrorism an existential threat, or more of a horrific nuisance? There are those politicians, as well as authors, who've argued the former, who've argued that religious terrorism has represented and does represent an existential threat. I think that if you look in context, on the basis of an engagement with vast numbers of mutually interrogatory sources, including first-hand sources over long pasts, this turns out not to be the case. In other words, I think religious terrorism tends to be horrific in terms of its consequences for the victims of course, but not an existential threat and indeed, if you compare it with some of the other threats that we do face – wars, genocide, hunger, disease, climate change –  I think religious, as other forms of non-state, terrorism, should be seen as profound causes for concern, but very much lesser than some of the other threats we face and far below an existential level.

Third question: is religious terrorism something which is new, or is it something which is familiar and which we have seen in the past over long experience? There are those again who have argued that it represents something profoundly new, that it represents a kind of post-fault line new development within our experience as a species. I think again that I am sceptical about that. I think that someone like Martha Crenshaw, herself a fellow of the British Academy, has pointed out that much of what people claim to be 'new' in this new religious form of terrorism turns out to be rather familiar, when you look closely at the evidence. Georgetown's Bruce Hoffman has pointed out that religion has long been connected with terrorism, within the history of this kind of non-state political violence, I think it's less new than some observers have argued.

Fourth: should religion, in terms of its engagement with terrorism or its influence upon terrorism, be seen as something which is a detachable part of that mixture? Or is it something which is inextricably and organically linked to the other elements within it? I would argue the latter. And I think arguing the latter helps us to avoid two potential errors of interpretation when we're looking at religion and the history of terrorism. One area of interpretation is to say, if only you could just extract the religion, if only people didn't believe in a deity, you'd find terrorism dissipating and in particular you might find certain forms of terrorism, suicide attacks, disappearing. I think that's wrong. I think the cases of non-state terrorism that have really mattered in terms of their historical effect, have been ones in which yes, there has been religious motivation of a profound kind, but there's also been a set of questions around other elements: state power, foreign interference politically within particular regions, hierarchies of power within particular settings, gender relations, control over economic resources, the sense of legitimacy of power and of identity for particular groups of people within society, individual motivations of revenge and so forth. So, I think it would be an error to say if only you could just detach religion and get rid of it, the terrorist threat would somehow evaporate. I think it's also important to recognise the interwovenness of religion with other elements, because some people argue that you find religion as an element in this mixture leading to terroristic violence, but it's really a kind of badge – it's a surface badge and there are more profound things going on, which are the real causes – and again I think that's something of a mistake. I think that if you're looking at groups like Hamas, for example, if you're looking at groups that have been involved in the violence associated with Al-Qaeda, associated with ISIS, for some people there is a profound sense that the religion actually does matter. Yes, it's interwoven with questions of the state; yes, it's interwoven with hostility, in some cases, to foreign powers such as US power; yes, it's interwoven with questions of identity, but religion is something which is inseparable from the rest of it and is organically interwoven.

I think there have been ways in which wrong answers to these four questions have made things significantly worse. We've tended not as states and societies to draw as profoundly as we could do, I think, upon the irenic resources that religion represents, in terms of countering terrorism. If you look at the United States’ national strategy for counter-terrorism – yes, it identifies religious terrorism as a major threat, but it overwhelmingly ignores the resources that there are in religious belief attachment and dissociation in limiting terrorism. Something has been and continues to be missed there. If we argue that religious terrorism is an existential threat, we’re far more likely to have exaggerated and counter-productive responses, often militaristic responses, whereas a more proportional way of dealing with it is much more likely to save life and limb than an overreaction to what is misdiagnosed as an existential threat. If we see religious terrorism as something completely new there's a danger that, as did happen after 9/11 on occasions, there's a danger that people forget what we know that we know about effective, measured, proportionate counterterrorism and again, things can be counterproductive as a response. If we pretend that religion can somehow be seen as a detachable element, that it's either just a superficial badge for what's really going on, that doesn't matter or that it's something which if only you could get rid of it would mean that you could get rid of terrorism, we misunderstand the complex interwovenness, the historical jaggedness and inextricability of religion with other important world historical forces in generating non-state terrorism.

What I’m arguing is if we get the answers to these four questions I’ve been talking about today, about religion and the history of terrorism, if we get our answers right, we'll be able to avoid some of the more egregious areas of response to terrorism and there is the possibility that the future will, as a consequence, be less blood-stained than it otherwise would.

Terror Through Time: The origins of the word, Radio 4 programme with Richard English FBA.

Securing our Future: A Decade of Counter-Terrorism Strategies, article by Mike Smith in the UN Chronicle.

Rethinking US Counterterrorism Strategy, publication by the Middle East Institute.