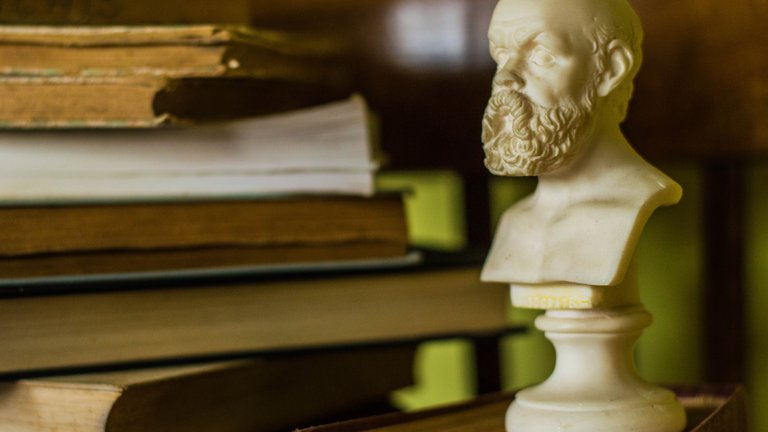 Professor M. M. McCabe FBA explores how introducing philosophical discussion into prisons may matter. If a society is measured by how it treats its worst off, we have reason to think hard about how we manage the lives of those in prison. Philosophy – in particular, the collaborative doing of philosophy – has a role to play.

Hello, I'm M. M. McCabe. I'm Professor of Ancient Philosophy Emerita at King's College London, and I'm a Fellow of the British Academy, the UK's voice for humanities and the social sciences.

Two years ago, two colleagues and I founded the charity Philosophy in Prison, and I would like to explain why. In general, if a society is measured by how it treats the worst off, we have reason to think with care about the lives of those we imprison. Especially now, perhaps, with a little more empathy after our own recent experience of confinement and isolation. Whatever the role of punishment – whether it is for retribution, whether it's the expression of the condemnation of the crime, or deterrent, or reformative – and however we might think that imprisonment exercises that role, the extended incarceration of other human beings is not morally neutral. This isn't only about justice or practicality, but about how lives are lived in these circumstances – the lives of the imprisoned. Surely we should not just throw away the key.

Education has a central role, therefore, to play in prison. It fills the time, but it allows opportunities for self-improvement, to advance understanding and develop skills so that outside prison there are better chances of rehabilitation and employment.

So all sorts of different educational opportunities and possibilities in prisons exist, supported by all sorts of charities and institutions, including universities who offer high-level, degree-level, courses in all sorts of areas, including philosophy. This is wonderful work – magnificent work – but there may be a little bit more to be said.

Philosophy has a long history in prison. In 399 BC, Socrates was executed by the Athenians for, among other things, corrupting the young. Plato represents him waiting in prison for death, talking to his friends about immortality, about reality, about philosophy itself. Socrates dies with equanimity, which may be too much to ask of any course, but the way Socrates took his discussion to work describes, perhaps, what philosophy may do still, whether in the setting of a prison or outside.

Consider the difference between having a philosophy and doing some philosophy. Having a philosophy may commit us to some overarching system, principle or attitude; idealism, for example, or realism, or scepticism. Doing philosophy just requires us to think hard in ordered and reflective ways about some question in hand; developing the weaponry to attack the huge questions of reality, of value, of knowledge, of existence. Philosophy in Prison proposes that there are in prisons great educational gulfs and impossibilities which philosophical discussion, "doing philosophy", may bridge. Consider the prison population. Some may be severely disadvantaged in education. They may be disillusioned, they may have low levels of literacy, they may not have English as the first language and so they may be beyond the reach of many courses. Does this make philosophy inaccessible? We think not. Others may be highly qualified and even know a great deal about philosophy – does this make more philosophy redundant? Again, we think not. Could there be any way of bringing together, in a single course or discussion group, people of such disparate educational backgrounds and would it matter to do so? We think there can and it does.

Confronted with one of the big philosophical puzzles – how can we know, for example, that the world we see is real? And what would it matter if it were not? Pretty much anyone is flummoxed. "Flummoxment", we think, can be harnessed in ways that bear directly on the problem with which I began: the treatment of the most disadvantaged. Think about paradox. Think about Heraclitus’s "you can't step into the same river twice... Oh yes I can… Oh no I can't because the water's flowing… Oh, still I can… Help! Which is it?"

The paradox has an immediate psychological drive of the puzzlement itself. Try something more acute. I am lying. If I say "I am lying", and it's true then I'm lying. But then what I say – "I am lying" – must be false. But if what I say is false, then I'm lying, and "I am lying" turns out true. So is it true, or false, or both, or neither? How could I say "I am lying" and even make sense? It's infuriating, but it's driving to the puzzlement itself – drives us to think about how we think. To think about truth and falsehood, about contradiction, about what we can successfully say and then to deep thought about reality, humanity, value and so on. Just perhaps how philosophy should be. And these puzzles can do that without a great deal of baggage. It doesn't need lots of stuff. You don't need to have read a great deal – you don't even need to read at all, just a kind of human curiosity across all sorts of boundaries.

There is more, if we think about philosophical puzzles together. In the face of an intractable puzzle, any of us is flummoxed – expert or novice. Think about the puzzle of time travel – can I travel back in time to change the past, so that I don't come to exist in the future and so that there is no "I" to travel back in time? If I can, what does that tell us about the nature of time, or of causation, or of existence? If I can't, why not? The promise of this puzzle for science fiction repeats the way that puzzlement leads any of us into a maze of questions about big things like time, or space, or causation, or identity. But also when we consider these puzzles together, the mutuality of our puzzlement – we're all in trouble together – has an equalising effect.

Doing this kind of work together in a prison suspends the overwhelming frameworks of authority and expertise for a while, in favour of a common enterprise. Done orally, face-to-face, in real-time, it is demanding. Each party needs to account for what they claim to explain and justify their arguments and their reasoning. Each is accountable here to another for what they say and in the process, each party learns to listen, to hear, to seek to understand the account of another. Conversations of this kind come to see the point of view of others, even to respect differences of opinion and other more radical disparities, too, so there is a developing sense of community – there are others here. The discussion is indeed populated by others than oneself and that brings moral attitudes with it.

The slow development of these hard conversations brings respect, tolerance, even understanding, in a context that is liberating just because it is limited and constrained.

Doing philosophy through discussion is fundamentally suited to being practiced within the difficult, challenging and contentious circumstances of prison. It may absorb its participants just while it's done, but it may inspire them to learn more. It may re-engage them with education at different levels and they may discover the value of talking to others in thoughtful ways. So, we run philosophy courses in prisons with this particular problem-based focus, seeking to break down the barriers of educational disadvantage. We make no claim that philosophy makes you good, but we do think that philosophy makes you think, and makes you think about huge questions and tiny ones with the weapons to do so. This, at the very least, is worth doing all by itself. It may be that philosophy thus is the examined life as Socrates insisted. But reflection, examination, can underpin change, as well as a kind of self-understanding, which might be invaluable to people in the circumstances of prison. It is invaluable too, we believe, to us all. We all have something to gain from this work being done. Thank you.

In it together, blog by M. M. McCabe.

Professor Cornel West in conversation with M. M. McCabe on Philosophy in the Public Sphere.