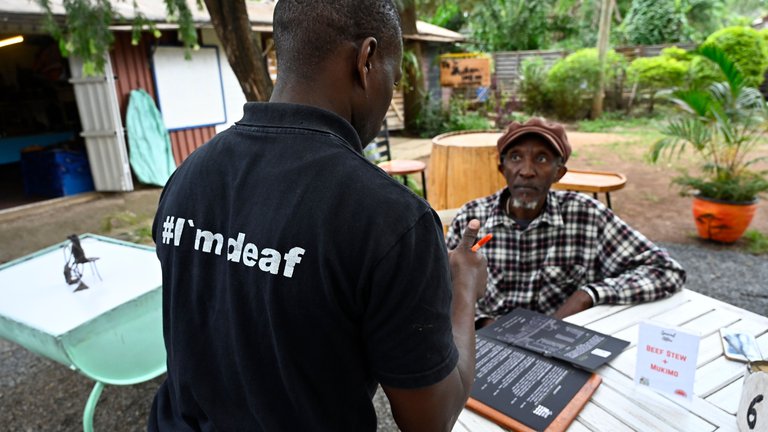 Professor Tom Shakespeare FBA discusses how people with a range of physical and sensory disabilities in Kenya, Uganda and Zambia have achieved educational, employment and family success.

My name is Tom Shakespeare and I'm a Fellow of the British Academy, the UK's national body for the humanities and social sciences. Today, I'm going to share findings of my research with disabled people in Africa, in just 10 minutes.

Disabled Africans face structural barriers in environment, in education, in employment. They're faced with discrimination that limits their chances of achieving success on an equal basis with others. All the indicators are bad. Yet, at the same time, anyone who spends time with disabled Africans has encountered dozens of successful, assertive, proud disabled people. Often these folk are associated with vibrant disabled people's organisations, but increasingly they've moved into mainstream roles in society.

I think we researchers have to capture the agency of disabled people, while balancing that with an awareness of those structural forces that make it so difficult for disabled people and their households to survive, let alone thrive.

As part of a research project funded by the ESRC and the Department for International Development, led by Nora Gross, who's a Professor at UCL, I wanted to find and talk to African people with disabilities who’d overcome barriers, and find out how they've done it. So I partnered with researchers like Joseph Simbaya, Anthony Mugeere, Emily Nyariki and their colleagues in Zambia, Uganda, and Kenya, and local disabled people's organisations and NGOs, in order to recruit people. So we did in-depth qualitative interviews – life history interviews if you like – because we wanted to hear the voices of disabled people. We had no problem recruiting people – folk were there. Our one hundred and five people included people with hearing loss; with sight loss; people who survived polio; people like me who had restricted growth; some folk who were albino and many with other physical impairments. 39 of our respondents were women. About a fifth of our people hadn't finished school – that's not surprising. We know from other data that approximately one-third of out of school children in lower/middle-income countries have disabilities. But I was surprised that a lot of our participants had degrees, and even postgraduate degrees. So why was that? Some people had found benefactors, individuals or development organisations to pay their school and college fees, but completing education was tough. As we were told by a Kenyan woman with mobility impairment – she'd been unable to attend the school because it was three kilometres away, and obviously people walk to and from school – until her grandfather made her walking sticks. And so from the age of ten, she could manage that journey. Other children with disabilities were mocked or even bullied in school; not just by other people, sometimes by teachers as well. If you had to endure that, family support was crucial.

For example, a guy from Uganda who'd survived polio in infancy was the first in his family to get a degree – that's something we heard a lot about. And he spoke warmly of his own father's commitment to his education. "If you don't go to school and study you definitely know you will not manage in this environment," said his dad. This participant subsequently sponsored the education of four of his siblings. This was very common. We heard lots of people say that they were the first to finish school in their family and that they were now fulfilling their family responsibilities, such as supporting their brothers and sisters, maybe their nephews and nieces, or unrelated children through education, or they were looking after their elderly parents – and remember, this is a context with almost no social support from government.

When they face barriers, our participants used ingenuity to overcome them. For example, another Kenyan woman described how she'd attended mainstream school. I said "but you are deaf – did you have a sign language interpreter?" and she said "no". I said "it must have been a big class" and she said "yeah – 17 children". What she did, because she couldn't hear a word that the teacher said, she found the cleverest pupil in the class and copied his or her notes. And if she didn't understand his or her notes, she found the next cleverest and copied them. In an African education system, a lot of it is by rote learning, so she learned the lessons, worked hard, memorised the notes, passed her O Levels, passed her A Levels, teacher training. Then she went to university to get an education degree. That's when she learned sign language, which opened a different world to her. She wasn't privileged, this woman. Her parents were uneducated agricultural workers, they didn't even own their own land. Neighbours had told her father that she would never amount to anything and her deafness was the result of witchcraft. So she wanted to prove them wrong. She was the only member of her family to finish school, let alone join a university. Now, of course, she's supporting her brothers and sisters. Education is very highly valued in Africa, because it improves your chances of getting a good job or livelihood afterwards. We looked for people who'd had economic success – so it's not surprising that we found lots of good jobs.

What had they done? Sixteen out of our 105 were civil servants of various levels, including right to the top level. Twelve were teachers or lawyers and of the rest, 22 worked in voluntary organisations or disabled people's organisations. Eighteen were traders or shopkeepers or were artisans like tailors or cobblers or knitters, nine worked in business, eight were farmers. I remember buying some of the nicest peanut butter I have ever tasted from one participant in Uganda. I want to go back for more of that! A Zambian guy who'd experienced spinal cord injury while he was at college told me how he bounced back, saying "okay this is just a disability, I can still use my hands, still use my brains, let me see what I can do". He had a shop, he employed several people – guess what? He was educating/sponsoring the education of a niece and one other unrelated child. What he wanted was a wife. Because life is more than a job. So I want to tell you that 71 of our 105 respondents were married, or they had been married but were now widowed. Between them they had a lot of children and many of these adults that we talked to were active in their church or mosque, because faith was very important to them. The blind guy, his mum said "you of all my children must finish school". He was a Muslim, he'd had two wives, I think 12 children. He was very active in his mosque. The tailor in Lusaka; I said to him 'what is the secret of your success?’ and without a beat he replied to me "the grace of God". Maybe, but more directly this man also had his sister to thank. She had bought him a sewing machine and his brother-in-law had paid for his tailoring classes and now he was married, with three children. He was he was doing okay. God worked maybe through his family if we want to go with that explanation. And all of this tells me something about their levers of success that enable people with disabilities to succeed against what are often very severe odds. Family: very important. Those supportive mothers or fathers, siblings or grandmothers or aunts. The guy who told us that his brothers had carried him – he was a polio survivor – five kilometres to school every day and then when he was at school they carried him between classes and to the toilet when he needed to go. That's family love that enabled him succeed.

My respondents were a bright bunch, they were very, very clever. I didn't do testing or whatever, but you can tell they were very bright. They showed great resilience, mental strength. They didn't give into self-pity. As one man said, "if I start pitying myself, I will fail, and no one is caring about me, and no one is willing to help me, so I have to cope with whatever comes ahead of me". So they sought out skills training, or their parents found skills training so they could become craftspeople, or to learn how to look after bees or pigs or chickens. One of our respondents became a photographer – went for training to become a photographer. It gave him a trade he could sell and earn.

In some cases, as I've said, these admirable personal qualities meant that they attracted the attention of sponsors or donors either from their own communities, or sometimes from a high-income country. Of course, if you're a bright kid with a disability and you're lucky, people say they deserve to be supported, we're going to help them get over those barriers. If you're in Uganda, many of our disabled respondents had government scholarships to attend university, because they were disabled students. And of course once you got those qualifications you might end up as a teacher – there's a good job. Or perhaps working in a disabled person's organisation.

I'm not saying that these folks are necessarily representative. Most people with disabilities in Africa, I'm afraid, are still defeated by barriers, still sometimes begging for something to eat and struggling to survive. And this story of prejudice; many of our people had experienced prejudice, maybe from a family member like a grandmother, maybe from a mother-in-law – "you're not going to marry my child" – or others in their own families or people they work with. Often they had chosen to work in disabled people's organisations because they were free of prejudice which had held them back in the mainstream. But the evidence overall of these 105 people is that many folk with disabilities do succeed in overcoming barriers. And in development terms, they're a good investment – you’re not wasting your money with this bunch. They give back to their families, to these children that they educate and to their communities. Often they become role models working through disabled people's organisations to show others a way forward. I think that the success of the people I spoke to shows that more disabled people can succeed if they get the chance.

If we can work together to remove barriers and provide better services, the stories I have told you today will be more common. Even telling these stories helps others, I hope, be inspired.

The COVID-19 epidemic is going to hit this continent very hard. Think about – if you're a day labourer, you need the money that day – you can't self isolate. There are ten ventilators for the whole of Burkina Faso. There are 20 million people. It's a different situation. There is no protective PPE for carers in these sorts of settings, so I hope that when the rebuilding comes, they're not forgotten. In Kenya, I met a very senior civil servant – she'd been born with a malformed arms like a thalidomide survivor and she'd had a great career. She'd really done well. What she said to me, I want you to remember: "you do what you can, at least to change the mind of these negative ones, and they're also positive ones who come to embrace you". Thank you for listening.

Disability as identity, video of keynote speech by Tom Shakespeare.