10-Minute Talks: The Hitler conspiracies – the Third Reich and the paranoid imagination 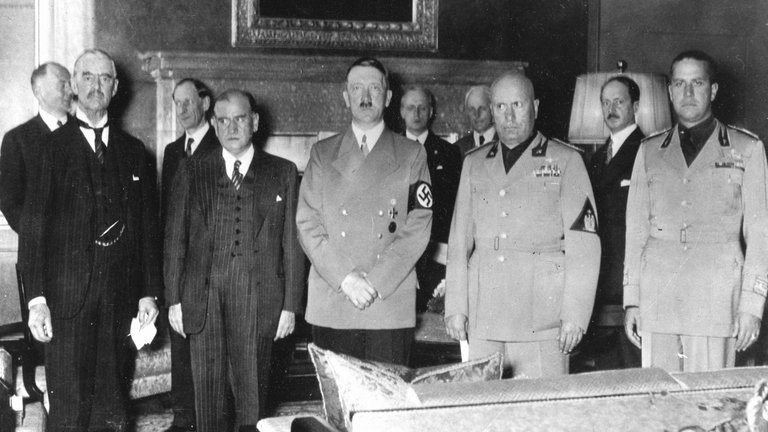 Hello, I'm Richard Evans, a Professor Emeritus of History at Cambridge and a Fellow of the British Academy. I've recently finished leading a research project funded by the Leverhulme Trust on conspiracy theories and their relationship to democracy. My part in it was to look, as I'm going to do now in the next 10 minutes, at the idea that Hitler didn't die in 1945, but survived and lived into old age in Argentina.

This idea has become more widespread in the last few years. The story's been told in articles, press reports, books, even a 26-part TV series. It's escaped the confines of the lunatic fringe and it has made its way into the mainstream media. From 2015 to 2018, the TV series Hunting Hitler showed a group of investigators travelling across South America looking for traces of the former dictator, who, it claimed, had lived in Argentina for many years. Appearing on the History Channel, which is watched by more than 300 million households worldwide, Hunting Hitler ran for three series with an average of three million viewers per episode.

Now, these claims are easily debunked. Hunting Hitler doesn't present any hard evidence at all, just conjecture and supposition. As Variety magazine commented in its review of this series, "if viewers were to take a shot of alcohol every time someone uses a phrase like, 'there could have been … ' or, 'there’s a chance that Hitler might have come here … ' or, 'if there was in fact a bunker …,' they would be plastered by the second or third commercial break."

Alleged proof of Hitler's survival crumbles into dust as soon as it's subjected to critical examination.

Submarines that are supposed to have carried Hitler and his companions to Argentina turn out to have been sunk before the end of the war or to have carried unlikely cargoes, such as cartons of cigarettes: Hitler neither smoked, of course, nor allowed smoking in his presence. Evidence from reports of sightings turns out to have been concocted by notorious fantasists. Almost all of these reports rest just on hearsay. They betray a staggering ignorance of the literature on the Nazi dictator.

Just to take one example: an elderly Argentinian woman Catalina Gomera, says she'd worked in a house where she had to leave meals for a mysterious German visitor outside his room. She wasn't allowed to see him. "It must surely have been Hitler since they were typical German meals," she says, "sausage, ham, fishes". According to the survivalist TV programme, Gray Wolf, by the makers of Hunting Hitler, this apparently, they say, "confirmation from a real human being that Adolf Hitler didn't die in the bunker in 1945". But just a little research on Hitler in any one of the many available biographies will reveal that he was a strict vegetarian.

Hunting Hitler claims "all these stories you've been told about Hitler's bunker, there's nothing to back it up," but there is a vast amount of research to back it up. It's just that none of the purveyors of the survival myth has bothered to read it. To start with, there's The Last Days of Hitler, published in 1947, in which the Oxford historian Hugh Trevor Roper tracked down eyewitnesses who'd been with Hitler in the bunker and reconstructed the sequence of events in meticulous detail.

Then there's the evidence collected by the Bavarian court in the 1950s in order to issue a death certificate for Hitler; it was finally signed in 1956. Members of his entourage were with him to the end in the bunker; his personal aids, Heinz Linge and Otto Gunsche, who took his corpse and that of Eva Braun up from the bunker into the Reich Chancellery garden, poured copious quantities of gasoline over them and burned them till there's almost nothing left, also produced their accounts. Then there's physical evidence of it. There's dental bridges, almost all that was left of his body, identified by the dental technicians who made them.

On the other hand, there's not one single photograph of him after 1945, not a single video, though his alleged companion in Argentina, Eva Braun, was a professional photographer who was always making home movies and taking snaps of their life together in Bavaria before and during the war. All the alleged photos of Hitler in Argentina are fakes. Not one person alleged to have helped Hitler either in Germany or in Argentina when he got there has ever been tracked down, or interviewed. Nobody who knew Hitler ever expressed the slightest doubt that he died in 1945.

Quite apart from anything else, he himself said that he'd kill himself if the war was lost. You can't really imagine him living in tranquility in his Argentinian exile, having abandoned the ambitions that had consumed him during his lifetime. Especially when other Nazis who really did escape to Latin America, like Eichmann, spent much of their time devising wholly unrealistic schemes for their triumphant return to Germany.

Why, then, in view of the overwhelming and incontrovertible evidence for Hitler's death do so many people appeared to believe he survived? For conspiracy theorists, the accepted version of history isn't reality, the official version can be disregarded, because it was propaganda designed to fool people. Surely, a political genius of Hitler's stature must have hoodwinked the Allies and proved once more his superiority to ordinary mortals. In some cases, the proponents of Hitler's survival have strong links to the neo-Nazi scene or are involved with white supremacy organisations in the US. For others, Hitler is an evil being whose survival is the result of work by malign forces within the 'deep state' of the US government and intelligence services that have brought "Nazi policies" (so-called), such as Obamacare and other products of an imaginary socialist new world order into being.

Hitler is a universally recognised figure, so any sensational alleged discoveries about him are bound to attract worldwide attention, as the news media's gullible, or exploitative, or cynical press reactions to reports of his survival have demonstrated. Some fringe groups purveying various forms of alternative knowledge, such as occultists or UFO enthusiasts, seem to think that associating their beliefs with Hitler will gain them attention. In some versions of the survival myth, Hitler's escape is achieved by occult means or involved his travelling to a secret Nazi flying saucer base beneath the Antarctic ice.

More generally, like other conspiracy theories, the idea of Hitler's survival provides a compensation for feelings of marginalisation and exclusion.

Those who believe or purport to believe in it, can boost their own self-esteem by assuring themselves that they know the truth, whereas everyone else who takes a different view is deliberately covering up or has been hoodwinked. In the age of social media, when 280-character tweets are for many taking on the main function of conveying information, opinions replacing argument, prejudices replacing knowledge. More and more people seem to think that it's pointless to make a judgement about a topic on the basis of detailed research or a careful appraisal of the evidence. The traditional gatekeepers of opinion – newspaper, magazine editors, radio, TV producers, book publishers – they've been bypassed, as even the most bizarre and irrational theories find their way into the public sphere. That this is dangerous as well as disturbing seems obvious. Portraying Hitler as a genius who is never defeated undermines the legitimacy of the historical profession, deems vast numbers of genuine researchers and writers and insults the memory of the millions who suffered under Nazism, or contributed to his overthrow, quite apart from the political threat that it poses.

Dismissing serious historical research is no different in the end from dismissing serious climate research, or serious medical research. In a situation such as the one we face, contempt for science and reason can cost lives. It can also, in the long run, cost the human race its future. Thank you very much.

"‘Big books by blokes about battles’: Why is history still written mainly by men?" article for The Guardian featuring Richard Evans.

The Third Reich in History and Memory, Richard J. Evans.

"Why Did Germany Lose the Second World War?" lecture by Richard J. Evans.