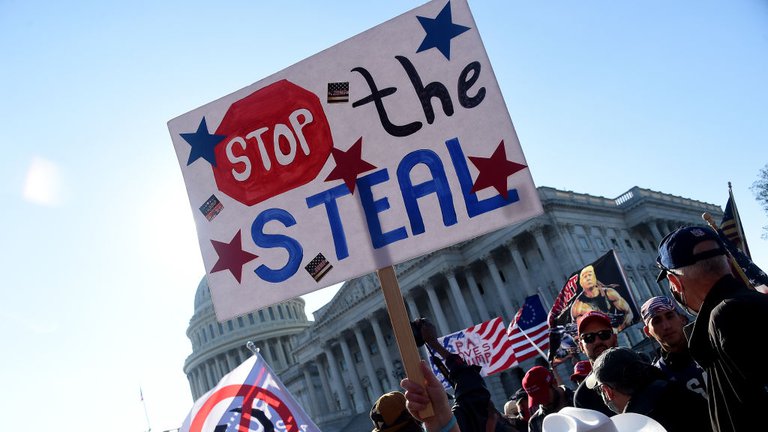 Michael Billig discusses the works of Hannah Arendt and why they may help us understand recent events involving President Donald Trump and Prime Minister Boris Johnson.

My name is Michael Billig. I'm Emeritus Professor of Social Sciences at Loughborough University and a Fellow of the British Academy. I'm recording this talk during the last week of Donald Trump's presidency when the dramatic events of his supporters storming Capitol Hill are fresh in the mind. I want to talk about Donald Trump, and also about Boris Johnson, and why what Hannah Arendt wrote more than 50 years ago may help us understand the perplexing events of today.

Who was Hannah Arendt? Well, she was born in 1906, to a middle-class, secular, German-Jewish family. She went to university, and she lived at a time of increasing anti-Semitism.

She experienced the collapse of German democracy at first hand. She was prescient enough to leave Germany in 1933, the year Hitler came to power. She escaped to France. Then during the war, when the Nazis invaded France, she had to escape again. This time she managed to flee to the United States, where she lived until her death in 1975.

In the United States, she lived principally off her own writings, rather than having a secure, comfortable university job. She wrote a number of great books such as The Origins of Totalitarianism, and she became a public intellectual. In my view, it's her essay Truth and Politics, which may help us understand what is happening now. She was well aware from her own experience of the fragility of democracy. Even in a country such as the United States, democracy could always be overthrown. What was fundamental for democracy, she wrote in this essay, was that there are shared facts, shared across the population. Without shared facts, democracy will be weakened, imperilled.

She particularly was worrying about the trend of turning fact into opinion. Because if everything is opinion, and everyone believes it's their right to hold their opinion, then there will be no shared facts. Arendt did not, and could not predict the modern world where opinions on matters of fact have become so widespread. We can always visit websites where we hear that scientific facts about evolution are just opinions; where facts about vaccinations are just opinions; where climate change is just an opinion.

In fact, the denial of these phenomena, these scientific phenomena, is accompanied by a belief which becomes a fact, a belief that science is being dominated by a conspiracy to produce fake facts, fake news. Nor did Hannah Arendt predict a world where the President of the United States would turn the results of a presidential election into a matter of opinion. Now, Trump has always been ready to believe in the greatness of himself and his achievements, in ways which suggest an inner fragility behind the pose of great strength.

He claims, for instance, to have done more for black people in America than any other president, except possibly Lincoln, to understand the coronavirus, which is sometimes calls "the Chinese virus", better than most experts. He has recently said that his was the greatest first-term presidency in history, and of course, it was so great that people would want him to have a second term. So why didn't he win the election? Well, in his own mind, he did, but they stole the election. A conspiracy of liberals producing fake news and fake facts, and they stole the election.

Now, this isn't a lie, as such. As Arendt wrote, in democratic conditions "deception without self-deception is well-nigh impossible." And so Trump persuades himself that he won the election, but also, in the course of this, matters of opinion are turned into fact. Trump calls the theft and the conspiracy "facts". Facts, he says, that he'll never renounce.

Now, this isn't like normal politics, where you have opponents arguing about rates of tax or the spread of healthcare. In Trump's mind, those who have stolen the election are not ordinary political opponents, they're enemies. Enemies of a nation, enemies who must be resisted at all costs. When he urged his supporters to march on Capitol Hill the violent results were quite predictable.

Now, the event concerning Boris Johnson happening in July 2019 is very different, very low-key, compared with the dramatic events on the Capitol. It's the final speech by Boris Johnson in his campaign to be elected Conservative leader and thus Prime Minister.

He addressed a group of Conservative members, and told a story of a kipper smoker from the Isle of Man. The kipper smoker complained that because of EU regulations his business was being threatened. He now had to send his kippers out wrapped in expensive plastic bags and fill out lots of forms. Johnson waved such a bag in the air and he told the story with great gusto. His supporters laughed and they applauded. He was making a serious point that once Britain left the European Union, under his leadership, then the country, the nation, would be freed from this tyranny of bureaucracy.

The problem was the story wasn't true. The Isle of Man isn't part of European Union. It doesn't have to follow European Union regulations, which, in any case, concern fresh fish, not smoked fish. It didn't seem to matter. Even when this was announced, the supporters of Johnson, whether in the press or in his audience, didn't seem to care that he was telling an untruth, didn't even seem to care that, to use Hannah Arendt's words, that Johnson, first as a journalist, and as a politician, was "on rather bad terms" with the truth. The supporters just said, "this is Boris Johnson being Boris, just giving a good show." It didn't matter.

No doubt, Johnson believed the kipper story when he heard it. He didn't check its truth, because he wanted to believe it and he wanted to use it in his speech. Now, the important point is not Johnson's motives but it's his supporters didn't care about the untruth of this story, and the untruth of other things Johnson has said. Similarly, with Trump the important factor is not his personal psychology, the reasons why he says certain things, but that 74 million Americans voted for him in 2020. According to the polls about half of these voters, 37 million voters, believed that the election was a fraud.

In a book The Origins of Totalitarianism, Arendt wrote that the ideal subject of totalitarian rule is not the convinced Nazi or the convinced communist, it was a person who had lost the distinction between fact and fiction, between true and false. When set against the storming of the Capitol, Johnson's story about a kipper smoker seems trivial, even humorous. When both events, the kipper story, and the storming of a Capitol are set against Arendt's words they should carry disturbing warnings to us all. Thank you.

The Origins of Totalitarianism, Hannah Arendt.

Hannah Arendt discussed on In Our Time.

"Eichmann in Jerusalem—I", Hannah Arendt in The New Yorker.