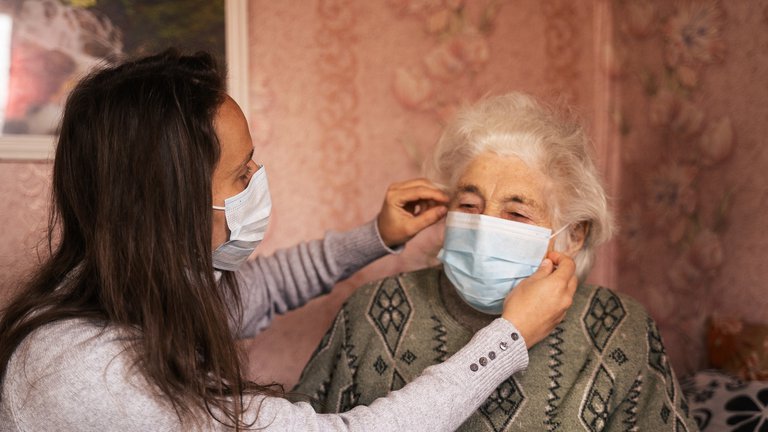 Hello. My name is Fiona Williams and I am a Fellow of the British Academy, which is the voice of the social sciences and humanities. Today, I am going to explore the impact of the COVID-19 pandemic on social and economic inequalities.

The pandemic has been unforgiving in exposing many of the consequences of 10 years of austerity, and especially inequalities and a crisis of social care.

In my 10 minutes I want to ask, what has the first wave of the pandemic revealed about existing inequalities in the UK? And what further inequalities should we be concerned about in the future? We know that risk of death from the virus is much greater for older people. The majority of those who've died are over 75 and of all deaths, more than half have been men and risk is greater for those with underlying health problems. But also, deprived areas have worn the brunt of being exposed to the virus, getting very ill or dying from it. And some jobs seem to carry a higher toll. Deaths have been seven times higher than average for men in lower paid and insecure occupations, particularly key workers in delivery and transport. And men and women working in social care were twice as likely to die from the virus.

Now, you'll remember about six weeks after the lockdown, the tribute photos started coming up on the television of those who had died, and as they went up many of us, and you might have known people in your communities, started to ask, why were so many of the deaths from minority ethnic groups? It seemed obvious to begin with: they were key workers, they were more exposed. But this didn't explain the disproportionate rates of illness and death in black, Asian and minority ethnic communities, the so-called BAME communities.

When you adjust for age, men and women from black African or Caribbean groups are four more times likely to die from the virus than their white counterparts  It's slightly lower but still very disproportionate for people of Asian and mixed ethnicities. I want to unpick this a bit more and look behind the data.

In February, Sir Michael Marmot produced a follow-up review of the big study his team had published in 2010. They found that in England the health of poorer people living in more deprived areas was getting worse and the inequalities between different groups was getting wider. Minority ethnic groups are not of course a homogeneous group, but together, BAME groups experience poverty up to twice as much more than those of the white population. All the conditions which pattern poverty – low-paid insecure employment, poor quality housing, overcrowding, living in deprived neighbourhoods – all these carry risks to ill health. Now this begins to explain some aspects, but it doesn't explain everything. For example, why were BAME doctors, not a group in poverty, also dying at higher rates from coronavirus? What the Marmot Review and many other related studies have found is that it is the intersections between socioeconomic status, ethnicity and racism which intensify health inequalities for minority ethnic groups.

How can racism explain the disproportionate rates of coronavirus deaths in minority ethnic communities? I want to offer some suggestions that researchers have developed. Racism in society operates in different ways. There's racism in institutions which directly or indirectly may prevent BAME groups accessing opportunities or being promoted. That might explain, for example, why it is that South Asian doctors are concentrated in the less valued specialisms of healthcare, such as geriatric medicine, which means that they've been more exposed to the virus. There's also structural racism running through areas of society, often shaped by negative discourse. The sorts of policy like creating a hostile environment for migrants, which has had an effect on the existential insecurity of minority ethnic groups and, as we saw, a direct effect on members of the Windrush generation. And then there are microaggressions, those everyday, interpersonal encounters. Small acts of disrespect, not being listened to, feeling dehumanised and so on.

More focused work on the intersection of black and minority ethnic experiences with health statistics, like that carried out by Professor David Williams of Harvard University over the past 20 years in both the US and the UK, shows that avoiding and managing all of these racisms require day-to-day emotional labour, what the writer Claudia Rankine refers to as "trying to dodge the build-up of Eurasia." The greater the exposure to these racisms, the more they generate pathogenic processes in the body which predispose to heart disease, diabetes and faster cognitive decline. Experiences of racism, in other words, are bad for your health.

Now, Public Health England recently produced a report, under some pressure, addressing the problem of racial disparities in deaths from the virus. The considerable evidence from BAME groups consistently repeated experiences of discrimination and harassment in the workplace. For example, the sorts of experiences that made asking for PPE measures more difficult. The report contained recommendations about the importance of collecting ethnicity data in healthcare, doing research with and not just on minority ethnic communities. But the overall question of racism was passed to the setting up of a new commission on racial disparities. This will join six other commissions whose recommendations have yet to be acted upon.

Yet the message of urgency was most clearly brought home in May by the support around the world for the Black Lives Matter protests after the death of George Floyd in the US. This has energised greater public awareness of the nature of racial inequalities and the resolve to attend to them. At the same time, other and linked inequalities from the pandemic need attention. Some of these are connected to the limitations of mitigation strategies. Again, what I’m interested in are those hidden unequal effects of the pandemic, which don't usually make the headline news. Take women workers. Their future employment opportunities are going to be critically affected because of the losses of what could be up to 150,000 childcare places, because childcare provision has closed down. Also, mothers have been disproportionately hit in employment, having lost their jobs, lost hours or been furloughed. And partly this is because they've taken on childcare responsibilities during lockdown and partly it's because they work in those areas most hit like hospitality, travel and non-food retail but also, they're more likely to be in more insecure, part-time, temporary or zero-hours work.

Without attending to these inequalities there might be a sharp reversal on gains made for gender equality.

Women also share these risks with younger workers, who are the group most likely to be hit by unemployment as recession bites. The recession will also see new households drawn into poverty and debt by their dependence on low levels of benefit. The need for major investment into employment, the benefit system, social care and childcare and affordable housing is urgent. Creating employment or instituting change needs also to meet the demands of combating climate change in ways that take these inequalities I’ve been talking about around ethnicity, gender and age seriously. Investing now in combating both will bring major social and economic returns. In some ways, the pandemic has been a dress rehearsal for what is yet to be achieved.

"The COVID Decade: understanding the long-term societal impacts of COVID-19", report on inequalities by the British Academy.

"Shaping the COVID Decade: addressing the long-term societal impacts of COVID-19", report on inequalities by the British Academy.