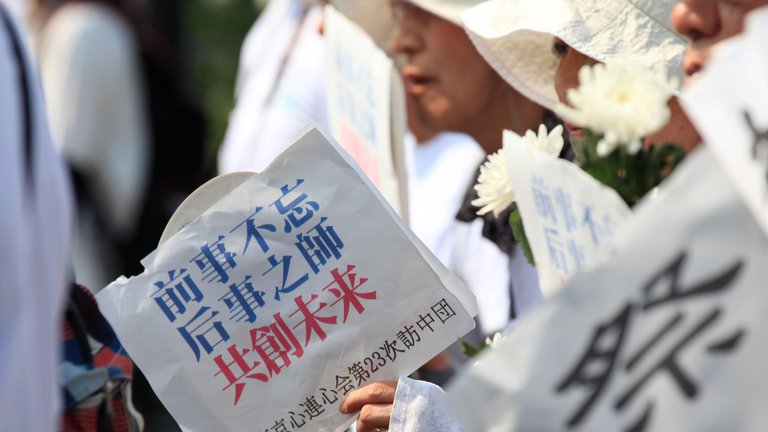 Professor Rana Mitter FBA explains what happened during World War II in China and why it matters so much for the politics and society of that country today.

Hello, my name is Rana Mitter. I'm a Fellow of the British Academy and I teach modern Chinese history and politics at the University of Oxford.

It's a real pleasure today to be here to talk to you about China. China, of course, is a subject that's been very much in the headlines in the UK and worldwide for the last few months. Not least because of the way in which the global pandemic crisis originated in Wuhan, a city in south-central China. But it's not that aspect of China that I want to talk to you about, or at least not directly, today. Instead, what I'd like to do is to talk about the way in which this year (the year of the virus, as it will inevitably be known) 2020, is also the 75th anniversary of something we perhaps all know much better, which is the ending of World War II. Those of us sitting in Europe will of course associate that with an event which is weeks away, the victory of the Allied forces over Nazi Germany in May 1945. We tend to forget that there was another ending to World War II and that was World War II in Asia, with the surrender of Japan in August of 1945. That other anniversary will be coming up in just a few months’ time. I want to suggest that there's a link between what's happening with the aftermath of the virus right now in China, and a wider set of political understandings that in the rest of the world we really ought to know a bit better, if we need to understand the China of today.

Today, you will hear that the word victory is being used over the virus by the Chinese government and the Chinese Communist Party. Now, whether the virus really has ended in China, we don't yet know. There may be a second wave, it may be there's more to discover, we simply haven't done enough research yet. We don't have enough data to be able to say. But let's look at that word – that phrasing. Why victory? It's not a phrase that's been used elsewhere. I'd like to suggest it could. It's because of one particular political imperative that's become a really big deal in China, not just in the last few weeks, but over the last 20 or 30 years. And that's a new interest in World War II.

What I want to suggest you today is that the way that the Chinese – not just the Communist Party, but actually ordinary people and people who make television programs, people on social media, all sorts of parts of Chinese society – are become increasingly interested and in some cases almost obsessed with what the legacy of World War II in China means for that country today. Rather as British people still speak quite often of Dunkirk and the Battle of Britain as if they were just yesterday, not 75 years ago, in terms of political analogies. Something quite similar is happening and has been happening in China to do with World War II. Let me explain why.

First of all, I think it's fair to say that the story of World War II in China hasn't been terribly well known in the wider world. I'll just give you a couple of quick headlines now. One is that in the eight years – and yes, World War II began not in 1939, but 1937 in China when it went to war with Japan – in the eight years that followed, until the atomic bombings of Japan that ended the war in Asia in 1945, millions and millions of Chinese died. We don't have exact figures – stats were difficult to maintain in a regular manner in wartime China – but we think that maybe eight to 10 or more million Chinese civilians and military died, either through direct combat, or through the effects such as starvation that came from the war itself. We also know now that more than 80, maybe even 100 million Chinese became refugees in their own country during those wartime years. We also know, but perhaps don't pay enough attention to, the fact the Chinese contribution was important to the overall war, because it held down over half a million Japanese troops at its height in World War II-era China. If that hadn't happened, if the Chinese hadn't fought back, both the nationalist and communist Chinese at the time, then Japan might have conquered China and the history of Asia and the world will be very different.

One of my previous books, called China's War with Japan: 1937-45 (in North America it's called Forgotten Ally, but it's the same book), tells that story, which is well worth the rest of the world knowing. It's really a relatively unknown theatre of World War II in the west. I want to talk a little bit more, not about the horror of that wartime experience, but what it means for China today. In many ways, after having not talked about the war very much during the era of Chairman Mao or back in the 50s and 60s, China has done a great deal more talking about World War II in the period since the 1980s, but really ramping it up in the new millennium since the 2000s . Why was that? Just to summarise briefly, the main force that fought the war in China during World War II – the main set-piece battles – was the then-government of China, the so-called Kuomintang or Nationalist Party of Chiang Kai-Shek, who later fled to Taiwan. The Communist Chinese were also important in fighting the Japanese – they fought together in that occasion but then they entered a vicious Civil War just after World War II had ended – 1945-49. That ended with Chiang Kai-Shek being sent off to or fleeing to Taiwan, the island off China, and the Chinese Communist Party under Mao taking over. For the next 25-30 years, Chairman Mao's China didn't want to say anything that might suggest that there any value in the old enemy Chiang Kai-Shek having fought the Japanese when they invaded. But that changed in the 80s and 90s. Mao was dead, Chiang Kai-Shek was dead, the mainland Chinese wanted to get a bit closer to Taiwan, and started saying something a bit nicer about the war effort that their government had fought all those many decades ago. Things have changed really significantly over the last 20 or 30 years. Nowadays it's very mainstream for today's Chinese Communist government to take advantage of the fact that its nationalist opponents in the civil war, who were actually allies before that in the war against Japanese during World War II, were all pushing towards the same sort of net goal, which of course was a unified and globally significant China.

How might you see a manifestation of that kind of political change in everyday geopolitics today? First of all, one example is what happens over in New York at the United Nations. Mao's China was kept out of the UN for about 20 years, and it was never very friendly towards it even when it went in after 1971. But today, China's leaders like to argue that they too – the Chinese – were just as much fighters on the Allied side as the United States or Britain, and that they were also founder members of the UN back in 1945. So just this year, in 2020, at the Munich Security Conference, China's Foreign Minister Mr. Wang Yi pointed out in one of his speeches that China was the very first signatory to the UN Charter in San Francisco back in 1945.

But it's not just the Chinese Communist Party that's taking the legacy of China's sacrifices in World War II, and arguing that therefore China has some right of ownership of contemporary order. It's also changing domestic politics in China, and often in ways that are much more subversive, slightly sideways to the official message, which is often rather propagandistic, rather bombastic from the Chinese Communist Party itself.

What do I mean? Well, for instance go down to not Beijing but Chongqing, a big city in the south-west of China. Why? It's not well-remembered outside China, but that was the temporary capital of China between 1937-46, and that was a place where millions of Chinese refugees went to hide during the war. They told their evacuee stories, the stories of being forced out of their homeland, their home provinces down to Chongqing, to oral historians the beginning of the 2000s. One of the reasons they had to wait until more than half a century after the war was over, was that of course they had fled not to a Communist controlled area of China during the war, but the opposition Nationalist controlled area. Now, that couldn't be said during Chairman Mao's time of rule, but nowadays when there's more space to breathe, when the Chinese Communist Party actually says we all fought the Japanese Communists and Nationalists together, that was all part of it.

That use of World War II metaphors is something that happens over and over again. You can see it on social media in China, on television soap operas which cover the wartime years, and talk about both the Communist and Nationalist contribution. My new book, China's Good War ,which is subtitled How World War II is shaping a new nationalism is out this autumn, and I hope you might be interested to read it. To understand finally why that metaphor about wartime is still so current in China today; note that, as I said at the beginning, when you look at the way that the Chinese Communist Party right now, in spring 2020 is talking about its capacity to overcome the coronavirus – we hope permanently, but we'll see what happens – the language they use is of victory in a people's war against the virus. In other words, exactly the same phrasing as was used about the victory of the people's war against the Japanese, way back in the 40s in World War II. For China, it's not just history, World War II, it’s current affairs. Very current affairs.

"China’s Communist party has rewritten its own past – but the truth will surface," Rana Mitter in The Guardian.

"Permanent revolution: The Chinese Communist Party at 100", article in the TLS by Rana Mitter.