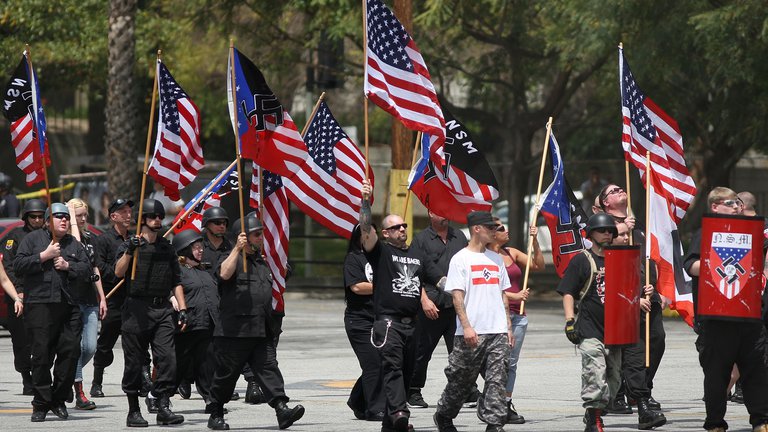 Professor Sarah Churchwell offers a brief history of “America First” and answers the perennial question of American fascism: can it happen here?

Hello, my name is Sarah Churchwell. I'm the Director of the Being Human Festival, the UK's national festival of the humanities, and Chair of Public Understanding of the Humanities at the University of London’s School of Advanced Study, where I research and write about American cultural history. For this special Summer Showcase 10-Minute Talk, I'm going to give a brief history of the slogan “America First” and its relation to lesser-known histories of American fascism.

When Donald Trump chose “America First” as one of his favourite political slogans – a phrase he went on to emphasise not only on the campaign trail but in his inaugural address and countless times during his presidency, many observers pointed to the troubling history behind the slogan.

What may seem at first glance merely a patriotic or nationalistic slogan – one that implies economic protectionism –  in fact has a much longer and darker history in American political discourse than many people realise.

When Trump resurrected “America First” worried observers pointed to the most notorious iteration of the phrase –  the America First Committee of 1942/1941, eventually led by Charles Lindbergh, whose anti-Semitic prejudices were well known at the time, and clearly demonstrated historically in the publication of his diaries and correspondence, where he privately mused about the so-called “Jewish problem” and the “Jewish question”, but also in public speeches he made, drawing on anti-Semitic tropes from the notorious forgery “The Protocols of the Elders of Zion”, which claimed that a Jewish conspiracy of bankers and media moguls was controlling the world. The same tropes that Hitler and Goebbels used in their own anti-Semitic propaganda.

The America First Committee, or AFC, sought to keep the United States out of World War II, on the basis that the fight against fascism was not America's fight. Some supported this position for motives of isolationism, others as pacifists or conscientious objectors, but a great many – like Lindbergh himself – also believed that what they called “Jewish interests” were trying to manipulate America into joining the war against its national interests. Implying, again as did the Nazis, that only Jewish people criticize Nazis and that Jewish interests were not only distinct from, but opposed to, America's national interest. The obvious implication being that Jewish-Americans are not really Americans at all. Lindbergh repeatedly said in his “America First” speeches that America should only join a European war if it was to protect what he called “the white races” from foreign invasion by “some Asiatic intruder”. That was reason to go to war in Europe,  but fighting fascism for Lindbergh was not. As long as white people were in charge, he said, in so many words, it didn't matter if they were German fascists or British democrats. The AFC was denounced by many at the time as a force for appeasement; Lindbergh a Vichy figure – an American collaborator.

Part of the objection expressed by American anti-fascist voices at the time, however, was also to the long history of the phrase “America First” itself. This was not in fact a slogan that emerged with the Second World War, but rather with the First. American adults in 1940 had grown up with this phrase and they knew it was what we call a ‘dog whistle’ – a coded reference intended to be understood by a target audience, that might seem innocent to the unaware.

The phrase “America First” became a national slogan in 1915. President Woodrow Wilson used it to tell the country that what were known as “hyphenate Americans” at the time, which is to say immigrant communities – German-Americans, Irish-Americans, Italian-Americans – needed to identify their loyalty. Was it “America First”, he demanded, or was it not? In other words, the President of the United States used the phrase “America First” as a loyalty test for recently naturalised American citizens. The slogan immediately exploded into a national catchphrase. Both Wilson his Republican opponent used it in the 1916 election, then it became a wartime jingoistic slogan on par, as was noted at the time, with “Deutschland über Alles”.

After the war, “America First” was used by isolationists, including William Randolph Hearst, to keep America out of the Treaty of Versailles and League of Nations. Then Warren G Harding successfully campaigned in 1920 on an isolationist, protectionist, “America First” platform, before the phrase was used to pass anti-immigration, eugenicist, restrictionist legislation in the mid-1920s. At the same time, a new political group was organising and asserting a national presence – the Ku Klux Klan. By the mid-1920s, the Klan had as many as five million members. In other words, one out of every three or four white Protestant American man was a Klansman.

The first Klan had been established in 1866 by a bunch of disaffected white supremacists in the immediate aftermath of the Civil War, after the emancipation of slaves and the extension of the franchise to African-American men. The Klan was only the most famous of many white supremacist groups that committed atrocities after the Civil War across the American South including torture, mutilation, dismemberment and burning human beings alive. They murdered black politicians in public, in broad daylight to stop them asserting their new legal and political rights. Their behaviour was so vicious and so lawless that the federal government took action and brought the organisation down, so the Klan was defunct by the mid-1870s, but although the organisation was gone, its savage and malevolent beliefs and behaviours survived.

It was at this time that the white south began erecting Confederate monuments to leaders of the Klan and the Confederate Army that marched against the United States government to secure its right to hold other human beings in bondage. It was also at this time that the white south began to whitewash, in every sense, its motives and actions during the conflict, rewriting history to say that slavery and white supremacism had not motivated the war but rather the incursion of federal government into state’s rights. The specific states right that they had fought over was in fact their right to keep slaves, but they began to skip that part and then to deny it outright.

In 1915, the same year that President Wilson who was born in the slaveholding south, before the Civil War and an avowed segregationist made “America First” a catchphrase, a Jewish man named Leo Frank was lynched in Atlanta a few months after a film called The Birth of a Nation was released. The film glorified the first Klan as a noble uprising of white people protecting their way of life from vicious marauding black people, when in historical fact it was exactly the other way around. The two events together sparked the rebirth of the Klan.

The second Klan declared itself a 100% American organisation that believed in Christian nationalism and ‘upheld white supremacism’. That is their language. One of its favourite slogans was ‘America First’ which is printed on pamphlets and ads announcing its explicit commitment to white supremacism.

At exactly the same time, in the early 1920s a new political phenomenon arose in Italy called fascism, as Mussolini took power. Americans instantly recognised what they were watching, as just a few quotations from American newspapers in 1921 and 1922 – as Mussolini took power – attest. The “Fascisti'”, they said, “might be known as the Ku Klux Klan” or “the Klan is the Fascisti of America” or “the single success of the Fascisti, or Italian Ku Klux Klan” or “the Fascisti is a secret order having some of the Ku Klux Klan method” and so on.

By the end of the 1920s, the second Klan was in decline – brought down by corruption and sex scandals – plus ça change! But in its stead soon sprouted a host of nativist, Christian nationalist, conspiratorial, anti-Semitic, white supremacist and xenophobic groups that borrowed many of the impulses and symbolisms of European fascism, including coloured shirts. In America in the 1930s there were the Blackshirts, the Khaki Shirts, Silver Shirts, White Shirts, the Brownshirts of Father Coughlin, the Greyshirts and the Dress Shirts – among many other extreme right-wing groups. The German American Bund began its existence as the “Friends of Hitler” movement before holding rallies and parades that matched the American stars and stripes with swastikas. All of these groups professed themselves “100% American”, and said they “put America first”. By the late 1930s they were referred to collectively and pejoratively in interchangeable terms as “Bundists”, “100 Percenters” and “America Firsters”. When the America First Committee formed in 1940 and began to urge America to stay out of the war, it was drawing on this long rhetorical history that everyone knew, and all of these groups flocked to it, seeing in it the political legitimacy they had long sought. Not everyone in the AFC agreed with the positions of what was called the lunatic fringe at the time, but they singularly failed to separate themselves from it – to denounce these supporters.

Ten minutes is not enough time to explain this complex, dark, controversial and inflammatory history. I have left an enormous amount out of this story, including how much European fascist movements learned from the structures and arguments of American white supremacism and anti-Semitism. But even the bare bones I presented in these brief minutes should help us hear the ferocious irony in the title of Sinclair Lewis’ best-selling 1935 novel, It Can’t Happen Here.