Value-led archaeological investigation of the European first millennium CE, especially in Britain and now Sicily, aimed at rediscovering and interpreting the changing experience and thinking of the people without history 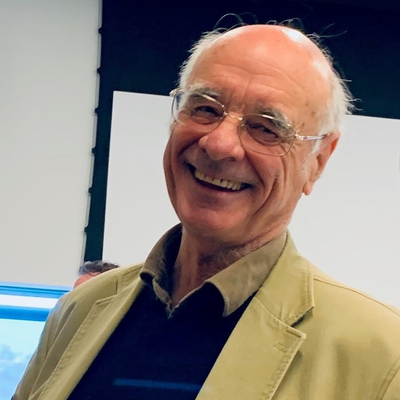 Martin Carver is Emeritus Professor of Archaeology at the University of York. He is a Fellow of the Society of Antiquaries of London and was Vice-President 2003-2006. Honorary Fellow of the Society of Antiquaries of Scotland and of the International Society of Anglo-Saxonists, and was the first secretary of the then Institute of Field Archaeologists in 1982. He was editor of Antiquity from 2002-2012. He has founded the archaeological companies BUFAU at Birmingham FAS Heritage at York and pioneered value-led field research in both academic and commercial sectors.

His principal research field has been the life and times of the communities of post-Roman Europe, as reflected in their art, archaeology and literature, beginning with site-based studies of early medieval Britain, at the Sutton Hoo and Portmahomack sites, and culminating in a synthesis for the island as a whole in Formative Britain, 2019. He has worked on the same period in Ireland, France, Italy and Scandinavia and is currently hte Principal Investigator of an ERC project in Sicily, The Archaeology of Regime change. This project is concerned with the experience of farmers and merchants and their families under successive Byzantine, Islamic and Norman governance. He has served on research grant committees for Britain (AHRC), Ireland (IRC, Humanities), Denmark, Sweden and on Panel H6 of ERC (2009-2015).

An enthusiast for communication with the public, he has published popular books on Sutton Hoo and Portmahomack, and been involved in the creation of museum/visitor centres at both sites. He has written and presented TV programmes for the BBC and other producers, mainly on Sutton Hoo, has made other broadcasts, notably for Radio 3’s essay series on Anglo-Saxon women, Five Alpha Females, and gives a dozen or so public lectures each year. His prizes include the British Association for the Advancement of Science for communicating research to the public in 2004; the British Archaeological Awards for best Project - Tarbat - in 2010, and the EAA European Archaeology Heritage Prize in 2015.

Department of Archaeology, University of York Head of Department

University of York Professor of Archaeology

Sutton Hoo. A seventh-century princely burial ground and its context

An account of the design and implementation of the campaign to investigate the site of Sutton Hoo in Suffolk, East Anglia where a seventh century clinker-built burial ship 27m long with a richly furnished chamber was discovered on the eve of the outbreak of war in 1939. The new campaign showed that the story began with a sixth-century cemetery of families that rose in prominence in the early seventh century with extravagant cremations, a horse and rider burial and two burial ships under mounds until it was abandoned in the later seventh century, to become a place of execution from the eighth century under the first Christian kings. The burials chronicalled the transition from emerging noble families aligned with Scandinavia to Christian royalty aligned with France and Rome and outlawing paganism.

Martin Carver - Published in 2019 by Taylor and Francis

This book reviews the evidence for the social, political and ideological change in the island of Britain as a whole – not just what was to become England but what was to become Scotland and Wales and highlights their similar challenges and their different responses to them between 400 and 1100 AD. The book examines the diverse natural assets of the peoples, their personal appearance, their settlements. their burial grounds, their monuments and their surviving writings. It concludes, among other things, that the main ideological battleground was not between ethnicities and religions, but whether social and economic success should be owed most to wealth creation, spiritual forces or to single male leaders.

Martin Carver - Published in 2017 by Boydell

The latest popular book on Sutton Hoo, successor to my Sutton Hoo Burial Ground of Kings - published by the British Museum in 1998, 2000 and 2014 and selling 30,000 copies - expands on Sutton Hoo’s context in Europe and the 'language' of mound burial in the wider world. Includes an account of the conservation of the site, its donation to the National Trust and the creation of the Museum and Visitor Centre, which was opened by Seamus Heaney in 2002 and received its millionth visitor in 2012.

Martin Carver, Justin Garner-Lahire and Cecily Spall - Published in 2016 by Society of Antiquaries of Scotland

An account of a campaign of excavation, survey and laboratory analysis 1994-2016, that demonstrated how an early community in Pictland responded to the changing political climate instigated by Anglo-Saxons, Scots and Vikings, creating a local system of governance led by a mounted warrior aristocracy, then by a monastic network, which went on to pursue a mercantile agenda under Scottish kings.

Portmahomack: Monastery of the Picts

Second edition. Popular account of the archaeological investigations on Tarbat Ness, including its discovery, investigation and interpretation, and the creation of a Museum and Visitor Centre opened by Prince Charles in 1999.

Martin Carver - Published in 2011 by Routledge

Being the Rhind Lectures for 2010 which discussed the way field archaeology had changed since the Rhind Lectures of Mortimer Wheeler fifty years earlier, which were published as Archaeology from the Earth. While in sympathy with Wheeler’s military ethos to 'have a plan', the book introduces the opportunities presented by the mega, macro, micro and nano methods now available and the consequent changes in strategy and recording. These deserve projects led by ingenious design rather than standard procedures.

The Archaeology of Medieval Europe, Vol. 2: Twelfth to Sixteenth Centuries

A review of the aims and methods of Medieval Archaeology in Europe. Companion volume to The Archaeology of Medieval Europe eighth to eleventh century led by our fellow James Graham-Campbell.

Martin Carver - Published in 2009 by Routledge

Presenting the ethos and procedures of value-led archaeological research. The books 424 pages are graded from introductions for first year students to early career professionals in Universities and Commercial companies.

Presenting the Dalrymple Lectures for 1990 at the University of Glasgow. This book proposed the thesis that the use of towns - and the ideological attitude towards them - varied greatly between north and south of Europe and between the fourth and eleventh century. In general there was little continuity, but the use of space, the monumentality and the symbolism deployed reflected a changing allegiance to kingship, spirituality and reliance on wealth as the millennium progressed.