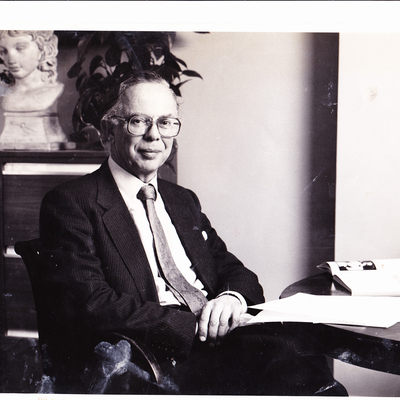 From 1950 until 1954 Professor Sir Christopher White was an undergraduate at the Courtauld Institute of Art, London University (B.A. Hons, 1954; D. Phil, 1970). In 1954 he was appointed an Assistant Keeper in the Department of Prints and Drawings in the British Museum; in 1965 he became a Director of P. and D. Colnaghi, specialising in old master drawings, leaving in 1971 to serve as Curator of Graphic Arts at the National Gallery of Art, Washington, when he also taught at the Institute of Fine Arts, New York University. In 1973 he was appointed Director of Studies at the Paul Mellon Centre for Studies in British Art, London, also serving as Visiting Professor in the Department of History of Art, Yale University. In 1985 he left to become Director of the Ashmolean Museum, Oxford, from which he retired in 1997. Subsequently he served as a Trustee for the Victoria & Albert Museum (1997-2004), the Mauritshuis in The Hague (1999-2008), and as a member of the Committee of the National Art Collections Fund (1998-2005). He was appointed CVO in 1995 and knighted in 2001. PRINCIPAL BOOKS 1969 Rembrandt as an Etcher, 2 vols., A Zwemmer, London, 1969 (2nd revised ed., Yale University Press, New Haven/ London, 1999) 1982 The Dutch Pictures in the Collection of HM The Queen, Cambridge University Press, 1982, 2nd rev. ed., Royal Collection Trust, 2015 1987 Peter Paul Rubens: man and artist, Yale University Press, New Haven/ London, 1987 (Eugène Baie Prize, 1983-7) 1994 (with C. Crawley) Dutch and Flemish Drawings at Windsor Castle, Cambridge University Press, 1994 1999 Ashmolean Museum, Oxford: Catalogue of the Collection of Paintings: Dutch, Flemish and German Paintings before 1900, Oxford University Press, 1999 2007 The later Flemish Pictures in the Collection of HM The Queen,Royal Collection Trust, 2007

Formerly Director of the Ashmolean Museum; Emeritus Professor of the Art of the Netherlands, University of Oxford; Emeritus Fellow, Worcester College, Oxford

The British Museum Assistant Keeper, Department of Prints and Drawings