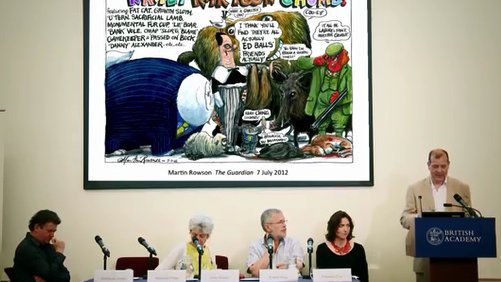 How are ordinary lives shaped by times of fiscal squeeze? How are such times reflected in film, cartoon, art and society?

The impact and experience of fiscal squeeze on the lives of ordinary people in terms of financial hardship is well documented, and as a coda to the two-day conference ‘When the Party’s Over: The Politics of Fiscal Squeeze in Perspective’, this early evening event examined how we are shaped by times of economic crisis and how such times are reflected in society and culture.

Chair: Professor Jean Seaton, University of Westminster Jean Seaton is Professor of Media History at the University of Westminster, Official Historian of the BBC and Director of the Orwell Prize (which she took over from Sir Bernard Crick who had founded it). She has written about wars, conflicts, reporting and the media, the media and politics and media policy. Her books include Carnage and the Media: the Making and Breaking of News about Violence, Power Without Responsibility: the Press Broadcasting and Internet in Britain, Politics and The Media in Britain. She is writing the official history of the BBC during the seventies and eighties.

Dr Nicholas Hiley, Head of the British Cartoon Archive, University of Kent Nicholas Hiley is a social historian who has held posts at the University of Cambridge and at King’s College London, and since 1999 has run the British Cartoon Archive at the University of Kent. The Archive, which celebrates its 40th anniversary this year, holds the national collection of British cartoons of political and social comment, including over 150,000 pieces of artwork, and 100,000 cuttings. Its website at www.cartoons.ac.uk has 190,000 catalogued images.

Dr Pamela Cox, University of Essex Pamela Cox is Dean of the Graduate School and Director of Essex ESRC Doctoral Training Centre, and teaches and researches across social history, social policy and criminology. In 2012, she presented a BBC2 series, Servants: The True Story of Life Below Stairs, investigating the history of domestic servants from the 1840s to the 1940s. She has recently published articles in History Workshop Journal, the British Journal of Criminology and the Journal of Law and Society. Her co-authored and co-edited books include Criminology: A Sociological Introduction (2009), Crime in Modern Britain (2002), and Becoming Delinquent: European Youth, 1650-1950 (2002).

Dr Frank Gray, Film Historian, University of Brighton Frank Gray is the Director of Screen Archive South East at the University of Brighton. His research is generally related to the screen collection developed by SASE over the last two decades and particularly focused on Victorian and Edwardian screen culture. The latter engages with popular spectacles and projections of the 19th and early 20th centuries, the uses of the magic lantern, the development of narrative film fiction, the emergence of 'news' on film and the introduction of the concept of cinema. The curation of museum exhibitions on these subjects has provided a popular focus for his research. He is currently the Chair of Film Archives UK, the organisation that represents and promotes the professional interests of the UK's public sector film archives.

This event was held in connection with the British Academy Conference on "When the Party's Over: The Politics of Fiscal Squeeze in Perspective", 9-10 July 2013.