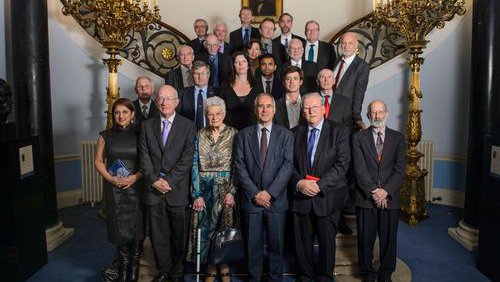 The President's Medal rewards signal service to the cause of the humanities and  social sciences. It was first awarded in 2010 and covers a broad range of  criteria, including insightful journalism contributing to public understanding,  use of research in policymaking, and public leadership.

The British Academy Medals are awarded  for landmark academic achievement in any of the humanities and social science  disciplines supported by the Academy. Up to three awards may be made each year.

A  major £25,000 prize for work on transcultural understanding, administered by  the British Academy, and named after International Relations scholar, Dr Nayef Al-Rodhan. It rewards outstanding academic achievement that illustrates the  interconnected nature of cultures and civilizations. This prize was first  awarded in 2013. In 2015, the prize was presented at a separate ceremony on 30 November.

The  Neil and Saras Smith Medal is awarded to a linguist of any nationality whose career has demonstrated the highest standards of achievement and scholarship. Professor Neil Smith was elected a Fellow of  the British Academy in 1999 and is Emeritus Professor of Linguistics at  University College London. In 2013 Professor Smith created a fund at the  Academy to provide for an annual medal in his own field of linguistics.

The  British Academy, in partnership with Cambridge University Press and the British  Journal of Political Science awards this prize in honour of Brian Barry, a  distinguished Fellow of the Academy and founding editor of the journal. The  prize will be awarded annually for excellence in political science, as displayed  in an essay submitted that has not been previously published elsewhere or under  consideration for publication elsewhere.

This prize commemorates Derek Allen (1910–1975), elected a  Fellow in 1963, who served from 1969 to 1973 as Secretary of the Academy and  from then until his death as Treasurer. It was founded in 1976 by his widow,  Mrs Winifred Allen, and her sons to provide an award for outstanding published  work by a scholar of any nationality in one of three academic fields in which  Mr Allen had particular interest. Annual awards are made in turn in musicology,  numismatics and Celtic studies. 2015 is the turn of Celtic Studies.

The founder of this award, Professor  Francis Burkitt, had bronze medals struck in 1923 for presentation by the  Academy to scholars in recognition of special services to Biblical  studies.  After his death in 1935 the  medals were given the name Burkitt Medals and alternately rewards work in New  Testament Studies and Hebrew Bible Studies (as in this year).

This  Medal was established in memory of the late Edward Ullendorff who was a Fellow  of the British Academy from 1965 until 2011.   He was formerly Professor Emeritus of Semitic Languages and of Ethiopian  Studies at the School of Oriental and African Studies, University of London. It  is awarded annually for scholarly distinction and achievements in the field of  Semitic Languages and Ethiopian Studies.

In April 1888 Mrs Rose Mary Crawshay established ‘The Byron,  Shelley, Keats In Memoriam Yearly Prize Fund'. In 1914, some years after her  death, the Charity Commissioners transferred the administration of the prize  fund to the Academy. One or two prizes are awarded each year ‘to a woman of any  nationality who, in the judgement of the Council of the British Academy, has  written or published within three years next preceding the year of the award an  historical or critical work of sufficient value on any subject connected with  English Literature, preference being given to a work regarding one of the poets  Byron, Shelley and Keats'.

The Peter Townsend Prize, worth £2,000 is awarded biennially for outstanding work  with policy relevance on a topic which Townsend made a major contribution. It  is awarded in commemoration of Professor Peter Townsend, one of the most  distinguished global figures in contemporary social policy and sociology.

The John Coles Medal for Landscape Archaeology is  awarded biennially for distinguished achievements in landscape archaeology. The  award was created following the decision of Professor John Coles, a Fellow of  the Academy since 1987, to establish an Academy Medal for this field.

The Kenyon Medal is awarded biennially in recognition of the work in the  field of classical studies and archaeology. The award was endowed by Sir  Frederic Kenyon, the Academy's sixth President and second Secretary.

Leverhulme  Medal and Prize for Humanities and Social Sciences

The Leverhulme Medal and Prize, worth £5,000, is awarded every three years for significant contribution to knowledge and understanding within the humanities and social sciences. The award is made in  partnership with The Leverhulme Trust

The Sir Israel Gollancz Prize, worth £400, is  awarded biennially for work connected with Anglo-Saxon, Early English Language  and Literature, English Philology, or the History of English Language.

The Serena Medal was endowed by Mr Arthur Serena after Great Britain's alliance  with Italy in the First World War, to be awarded annually ‘for eminent services  towards the furtherance of the study of Italian history, literature, art or  economics'.

This annual prize,  made in partnership with Wiley-Blackwell, rewards achievement in research for  an outstanding early career economist. The prize is a sum of £5,000.

This annual prize, made in partnership with Wiley-Blackwell, provides an award of £5,000 in recognition of excellence in research in  psychology. It alternately rewards lifetime achievement by an outstanding  international scholar (as in this year) and promising early career work (within  five years of doctorate) by a UK-based psychologist.

More about the British Academy's Prizes and Medals