The past hovering: an evening of war poetry 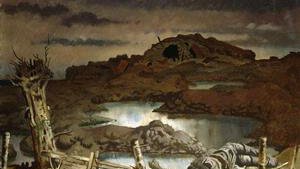 The evening featured readings by three distinguished poets – Michael Longley and Andrew Motion – who over many years and in different forms have deeply engaged with the First World War and its poetry. The readings featured poems from the time and their own works, including Longley’s The Stairwell and Stallworthy’s War Poet which are to appear in 2014. In course of the evening, Sir Andrew Motion also received the 2014 Wilfred Owen Prize and discussed his relationship to Owen.